The Gandhāran manuscripts are a collection of manuscripts from the ancient region of Gandhara (present-day northwestern Pakistan and eastern Afghanistan). The texts, dating from about the 1st century CE,[1] represent the literature of Gandharan Buddhism. They are written in Gāndhārī.

These texts were sold to European and Japanese institutions and individuals, and are currently being recovered and studied by several universities. The Gandhāran texts are in a considerably deteriorated form, but educated guesses about reconstruction have been possible in several cases using both modern preservation techniques and more traditional textual scholarship, comparing previously known Pāli and Buddhist Hybrid Sanskrit versions of texts. Other Gandhāran Buddhist texts—"several and perhaps many"—have been found over the last two centuries but lost or destroyed.[2]

Scholar Richard Salomon attributes the texts to the Dharmaguptaka sect.[3] Salomon states that British Library scrolls "represent a random but reasonably representative fraction of what was probably a much larger set of texts preserved in the library of a monastery of the Dharmaguptaka sect in Nagarāhāra."[4] 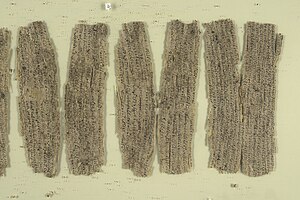 In 1994, the British Library acquired a group of some eighty Gandharan manuscript fragments from the first half of the 1st century. These birch bark manuscripts were stored in clay jars, which preserved them. They are thought to have been found in western Pakistan, the location of Gandhara, buried in ancient monasteries. A team has been at work, trying to decipher the manuscripts: three volumes have appeared to date (2009). The manuscripts were written in the Gāndhārī language using the Kharoṣṭhī script and are therefore sometimes also called the Kharoṣṭhī Manuscripts.

The collection is composed of a diversity of texts: a Dhammapada, discourses of the Buddha such as the Rhinoceros Sutra, avadanas and Purvayogas, commentaries and abhidharma texts.

There is evidence to suggest that these texts may belong to the Dharmaguptaka school (Salomon 2000, p. 5). There is an inscription on a jar to that school, and there is some textual evidence as well. On a semi-related point, the Gandhāran text of the Rhinoceros Sutra contains the word mahayaṇaṣa, which some might identify with "Mahayana" (Salomon, 2000, p. 127). However, according to Salomon, in Kharoṣṭhī orthography there is no reason to think that the phrase in question, amaṃtraṇa bhoti mahayaṇaṣa ("there are calls from the multitude"), has any connection to the Mahayana. (Salomon, 2000, p. 127).

The Senior collection is superficially similar in character to the British Library collection in that they both consist of about two dozen birch bark manuscripts or manuscript fragments arranged in scroll or similar format and written in Kharosthi script and Gandhari language. Both were found inside inscribed clay pots, and both are believed to have come from the same or nearby sites, in or around Hadda in eastern Afghanistan. But in terms of their textual contents, the two collections differ in important ways. Whereas the British Library collection was a diverse mixture of texts of many different genres written by some two dozen different scribes (Salomon 1999: 22-55, esp. 22-23 and 54-55), all or nearly all of the manuscripts in the Senior collection are written in the same hand, and all but one of them seem to belong to the same genre, namely sutra. Moreover, whereas all of the British Library scrolls were fragmentary and at least some of them were evidently already damaged and incomplete before they were interred in antiquity (Salomon 1999: 69-71; Salomon 2000: 20-23), some of the Senior scrolls are still more or less complete and intact and must have been in good condition when they were buried. Thus the Senior scrolls, unlike the British Library scrolls, constitute a unified, cohesive, and at least partially intact collection that was carefully interred as such.[7]

He further reports that "largest number of parallels for the sutras in the Senior collection are in the Samyutta Nikaya and the corresponding collections in Sanskrit and Chinese."[8]

The Buddhist works within Schøyen collection consists of birch bark, palm leaf and vellum manuscripts. They are thought to have been found in the Bamiyan caves, where refugees were seeking shelter. Most of these manuscripts were bought by a Norwegian collector, named Martin Schøyen, while smaller quantities are in possession of Japanese collectors.[2] These manuscripts date from the second to the 8th century CE. In addition to texts in Gandhāri, the Schøyen collection also contains important early sutric material in Sanskrit.[9]

The Buddhist texts within the Schøyen collection includes fragments of canonical Suttas, Abhidharma, Vinaya, and Mahāyāna texts. Most of these manuscripts are written in the Brahmi scripts, while a small portion is written in Gandhari/Kharoṣṭhī script

Among the early Dharmaguptaka texts in the Schøyen Collection, is a fragment in the Kharoṣṭhī script referencing the Six Pāramitās, a central practice for bodhisattvas in Mahāyāna Buddhism.[10]

One more manuscript, written on birch bark in a Buddhist monastery of the Abhidharma tradition, from the 1st or 2nd century CE, was acquired from a collector by the University of Washington Libraries in 2002. It is an early commentary on the Buddha's teachings, on the subject of human suffering.

In 1892 a copy of the Dhammapada written in the Gandhārī Prakrit was discovered near Khotan in Xinjiang, western China. It was broken up and came to Europe in parts, some going to Russia and some to France, but unfortunately a portion of the manuscript never appeared on the market and seems to have been lost. In 1898 most of the French material was published in the Journal Asiatique. In 1962 John Brough published the collected Russian and French fragments with a commentary.

The local origins of the present collection are not clear. Several part of it were seen in Peshawar in 2004. According to usually reliable informants the collection of birch-barks was found in a stone case in the Pakistan-Afghanistan border area, comprising the Mohmand Agency and Bajaur. It was split on arrival and some parts are now in a Western collection, while others went to a Government agency and yet other parts may still be with the private owner.

In 2012, Harry Falk and Seishi Karashima published a damaged and partial Kharoṣṭhī manuscript of the Mahāyāna Aṣṭasāhasrikā Prajñāpāramitā Sūtra.[12] It is carbon dated to ca. 75 CE, making it one of the oldest Buddhist texts in existence. It is very similar to the first Chinese translation of the Aṣṭasāhasrikā by Lokakṣema (ca. 179 CE) whose source text is assumed to be in the Gāndhārī language. Comparison with the standard Sanskrit text shows that it is also likely to be a translation from Gāndhāri as it expands on many phrases and provides glosses for words that are not present in the Gāndhārī. This points to the text being composed in Gāndhārī, the language of Gandhāra (the region now called the Northwest Frontier of Pakistan, including Peshawar, Taxila and Swat Valley). The "Split" ms. is evidently a copy of an earlier text, confirming that the text may date before the first century of the common era.

Scholarly critical editions of the texts of the University of Washington and the British Library are being printed by the University of Washington Press in the "Gandhāran Buddhist Texts" series,[13] beginning with a detailed analysis of the Ghāndārī Rhinoceros Sutra including phonology, morphology, orthography, paleography, etc. Material from the Schøyen Collection is published by Hermes Publishing, Oslo, Norway.

Some of the published material is listed below: