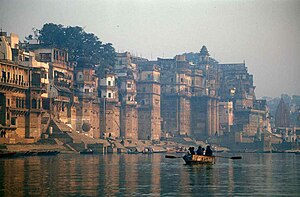 The Ganges in Varanasi

The Ganges River (Skt. Gaṅgānadī; Tib. གང་གཱའི་ཀླུང་; Wyl. gang gA’i klung) is the major river in the north of India and, according to Buddhist cosmology, one of the four sacred rivers that flow through the southernmost continent of Jambudvipa, along with the Sindhu,Vakṣu, and Sita. Several of the important Indian kingdoms that supported the growth of Buddhism were based in the Ganges River valley, including Kosala in the middle and Magadha in the lower Ganges valley.[1]

The sand in the Ganges River was reputed to be extremely fine in texture, and so is often used in similes in Buddhist texts to refer to an infinity, i.e. “as many as the grains of sand in the river Ganges.”[1]