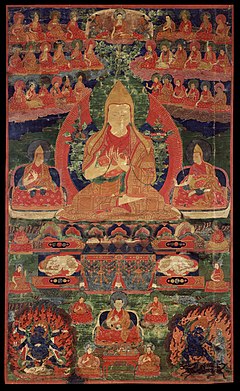 An illustration of Je Tsongkhapa, the founder, and his two principal students (Kédrup and Gyeltsap) on his left and right with other lineage teachers and protectors of the Gelug tradition. 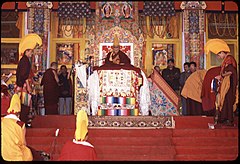 The Gelug (Tib. དགེ་ལུགས་ dge lugs) school is one of the four schools of Tibetan Buddhism. It was founded in the 14th to 15th century by Je Tsongkhapa, renowned for both his scholarship and virtue. Its spiritual head is the Ganden Tripa and its temporal one the Dalai Lama.

Based on the Kadampa tradition founded by Atisha, the Gelug school spread quickly through the activity of Tsongkhapa's many illustrious disciples, and eventually became the predominant school in Tibet, with major centres around Lhasa and in Amdo. The Gelug school is known for its emphasis on logic and debate.

"The Gelug tradition stresses a deep and intensive study of the Buddhist scriptures. Philosophically, it follows the Prasangika Madhyamika viewpoint, and the tantras practised are Guhyasamaja, Chakrasamvara, Vajrabhairava and others, such as Hevajra, Kalachakra and Vajrayogini. In his monastic reforms, the Thirteenth Dalai Lama (1876-1934) established a formal 'geshe degree' programme of advanced training in the three great monastic universities, open to any monk. A Geshe is a master of the five major subjects of Buddha's teachings: Perfection of Wisdom (Prajnaparamita), Middle Way (Madhyamika), Discipline (Vinaya), Phenomenology (Abhidharma) and Valid Cognition (Pramana)."[1]