From Encyclopedia of Buddhism
(Redirected from Gods)
Jump to navigation Jump to search
See also: Deities 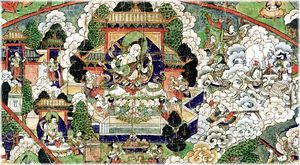 Deva (T. lha ལྷ་; C. tian; J. ten ) are one of the six classes of beings in cyclic existence (samsara). They are commonly referred to as "gods" and "goddesses" in English. These divine samsaric states are the fruit of positive karma generally related to acts of generosity, meditative concentration or practices of asceticism, but which are still tainted by worldly goals. Because the life of the gods is free from suffering, the idea of practising Dharma never occurs to them. When the effect of the actions which sent them there is exhausted, these gods will suffer greatly, while their body gradually degenerates. At the end of their lives, they have very frightening visions of their upcoming lower rebirth in samsara, in which these gods inevitably fall back into.