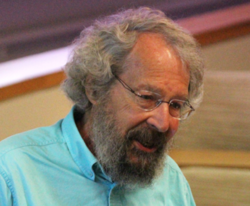 Gregory Schopen is emeritus professor of Sanskrit and Buddhist Studies at University of California, Los Angeles (where he retired in 2019).[1][2]

Schopen earned a B.A. from Black Hills State College (South Dakota), M.A. from McMaster University (Ontario, Canada) and Ph.D. from the Australian National University (Canberra). His teaching career began at the University Michigan, Ann Arbor, where he was hired by the noted Buddhist scholar Luis Gómez. Schopen went on to teach at the University of Washington and Indiana University before joining the UCLA faculty. He has also been a guest professor at numerous universities, including Brown University.[1]

Over the course of his career, Schopen trained many graduate students, chaired the department of Asian languages and cultures, won a MacArthur Fellowship (1985) and was elected to the American Academy of Arts and Sciences (2015). He has authored a great number of scholarly journal articles.[1]

The scholarship of Gregory Schopen focuses chiefly on Indian Buddhist monastic life and early Mahāyāna movements in the first few centuries of the common era. As Dan Boucher of Cornell University remarked, "By bringing the Buddha down back to earth, Gregory has made things very messy for us. But it is precisely in this messiness that we find the texture of lived religious traditions. And for this, students of Buddhism for generations to come have much to thank Gregory Schopen for."[1]

Contemporary scholar Shayne Clark stated: "[His] numerous studies of the rich and still relatively unexplored terrain of Buddhist monastic law codes have made us entirely re-envision the religious and non-religious lives of Indian Buddhist monks and nuns, and by extension, our understanding of the religious life — what it meant to be Buddhist, what it meant to be non-Buddhist, and even human, in India in the first few centuries of the common era and beyond."[2]