The Hall of Guanyin or Guanyin Hall (simplified Chinese: 观音阁; traditional Chinese: 觀音閣; pinyin: Guānyīngé or simplified Chinese: 观音殿; traditional Chinese: 觀音殿; pinyin: Guānyīndiàn) is the most important annex halls in Chinese Buddhist temples and mainly for enshrining Guanyin (Avalokiteśvara). Guanyin, also called "Guanshiyin" (觀世音), "Guanshizizai" (觀世自在), "Guanzizai" (觀自在), etc., is the attendant of Amitabha and one of the "Western Three Saints" (西方三聖). Guanyin is renowned for his mercy and sympathy. According to Chapter of the Universal Gate of Avalokiteśvara Bodhisattva (《觀世音菩薩普門品》), if people are in danger, they just need to call his name and he will hear them and go to save them. Since he has many manifestations, different places enshrine different statues of Saint Guanyin (圣觀音), Guanzizai (觀自在), and Thousand-armed and eyed Guanyin (千手千眼觀音菩薩).[1][2][3]

Statue of Saint Guanyin sits in the lotus posture with a lotus or the Yujingping in hand, wearing Keyura, necklaces and decorations and a precious crown on the head. There is a sitting statue of Amitabha (阿彌陀佛) on the crown, which is the main symbol of Guanyin.[1]

Statue of Guanzizai sits with on leg crossing and one leg dropping. The Yujingping full of sweet dew and a willow branch is placed near him, representing his mercy and sympathy to spread to all the people. A boy and a girl serve as his attendants on his two sides. The boy is Sudhana (Shancai Tongzi; 善財童子) and the girl is Longnü (龍女).[1] 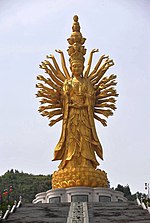 Thousand-armed and eyed Guanyin, has thousands of arms on both sides of the body. For statues, there are often 42 hands with one eye in each to symbolize the thousand hands. The middle two hands are in closing palm posture and other hands are holding Vajras, sutra scrolls Dharma seals and other weapons. Guanyin's thousand hands mean to protect all living creatures and the eyes mean to view over the world.[1]