From Encyclopedia of Buddhism
(Redirected from IAST)
Jump to: navigation, search

The International Alphabet of Sanskrit Transliteration (I.A.S.T.) is a transliteration scheme that allows the lossless romanization of Indic scripts as employed by Sanskrit and related Indic languages. It is based on a scheme that emerged during the nineteenth century from suggestions by Charles Trevelyan, William Jones, Monier Monier-Williams and other scholars, and formalised by the Transliteration Committee of the Geneva Oriental Congress, in September 1894.[1] IAST makes it possible for the reader to read the Indic text unambiguously, exactly as if it were in the original Indic script. It is this faithfulness to the original scripts that accounts for its continuing popularity amongst scholars.

University scholars commonly use IAST in publications that cite textual material in Sanskrit, Pāḷi and other classical Indian languages.

IAST is also used for major e-text repositories such as SARIT, Muktabodha, GRETIL, and sanskritdocuments.org.

The IAST scheme represents more than a century of scholarly usage in books and journals on classical Indian studies. By contrast, the ISO 15919 standard for transliterating Indic scripts emerged in 2001 from the standards and library worlds; it includes solutions to problems such as representing Old Indo-Aryan and New Indo-Aryan languages side by side in library catalogues, etc. For the most part, ISO 15919 follows the IAST scheme, departing from it only in minor ways (e.g., ṃ/ṁ and ṛ/r̥)—see comparison below.

The Indian National Library at Kolkata romanization, intended for the romanization of all Indic scripts, is an extension of IAST.

The IAST letters are listed with their Devanāgarī equivalents and phonetic values in IPA, valid for Sanskrit, Hindi and other modern languages that use Devanagari script, but some phonological changes have occurred:

The highlighted letters are those modified with diacritics: long vowels are marked with an overline, vocalic (syllabic) consonants and retroflexes have an underdot.

Unlike ASCII-only romanizations such as ITRANS or Harvard-Kyoto, the diacritics used for IAST allow capitalization of proper names. The capital variants of letters never occurring word-initially (Ṇ Ṅ Ñ Ṝ) are useful only when writing in all-caps and in Pāṇini contexts for which the convention is to typeset the IT sounds as capital letters.

For the most part, IAST is a subset of ISO 15919 that merges: the retroflex (underdotted) liquids with the vocalic ones (ringed below); and the short close-mid vowels with the long ones. The following seven exceptions are from the ISO standard accommodating an extended repertoire of symbols to allow transliteration of Devanāgarī and other Indic scripts, as used for languages other than Sanskrit.

The most convenient method of inputting romanized Sanskrit is by setting up an alternative keyboard layout. This allows one to hold a modifier key to type letters with diacritical marks. For example, alt+a = ā. How this is set up varies by operating system.

Linux Modern Linux systems allow one to set up custom keyboard layouts and switch them by clicking a flag icon in the menu bar.

macOS One can use the pre-installed US International keyboard, or install Toshiya Unebe's Easy Unicode keyboard layout. A revision of this is Shreevatsa R's EasyIAST.

Computer input by selection from a screen 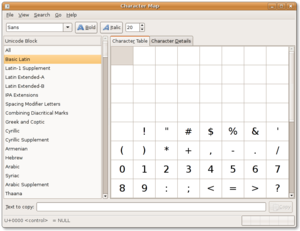 Many systems provide a way to select Unicode characters visually. ISO/IEC 14755 refers to this as a screen-selection entry method.

Microsoft Windows has provided a Unicode version of the Character Map program (find it by hitting ⊞ Win+R then type charmap then hit ↵ Enter) since version NT 4.0 – appearing in the consumer edition since XP. This is limited to characters in the Basic Multilingual Plane (BMP). Characters are searchable by Unicode character name, and the table can be limited to a particular code block. More advanced third-party tools of the same type are also available (a notable freeware example is BabelMap).

macOS provides a "character palette" with much the same functionality, along with searching by related characters, glyph tables in a font, etc. It can be enabled in the input menu in the menu bar under System Preferences → International → Input Menu (or System Preferences → Language and Text → Input Sources) or can be viewed under Edit → Emoji & Symbols in many programs.

Equivalent tools – such as gucharmap (GNOME) or kcharselect (KDE) – exist on most Linux desktop environments.

Users of SCIM on Linux based platforms can also have the opportunity to install and use the sa-itrans-iast input handler which provides complete support for the ISO 15919 standard for the romanization of Indic languages as part of the m17n library.