For other uses, see Incarnation (Christianity) or Incarnate (disambiguation)

Incarnation literally means embodied in flesh or taking on flesh. It refers to the conception and birth of a sentient creature who is the material manifestation of an entity, god or force whose original nature is immaterial. In its religious context the word is used to mean the descent from Heaven of a god, or divine being in human/animal form on Earth.

The Pharaohs of Ancient Egypt were sometimes said to be incarnations of the sun gods Horus and Ra.

In the Bahá'í Faith, God is described as a single, imperishable God, the creator of all things, including all the creatures and forces in the universe. The connection between God and the world is that of the creator to his creation.[1] God is understood to be independent of his creation, and that creation is dependent and contingent on God. God, however, is not seen to be incarnated into this world and is not seen to be part of creation as he cannot be divided and does not descend to the condition of his creatures. Instead, in the Bahá'í understanding, the world of creation emanates from God, in that all things have been realized by him and have attained to existence.[2] The Bahá'í concept of the intermediary between God and humanity is expressed in the term Manifestation of God, which are a series of personages, such as Jesus and Bahá'u'lláh, who reflect the attributes of the divine into the human world for the progress and advancement of human morals and civilization.[3] In expressing God's intent, these Manifestations are seen to establish religion in the world.[3] The Manifestations of God are also not seen as an incarnation of God, but are instead understood to be like a perfect mirror reflecting the attributes of God onto this material world.[3][4]

In the teaching of the Buddha sentient beings incarnate due to the psychological factors of ignorance, craving and clinging which results in the phenomenon of becoming and rebirth. To be born human is considered a great privilege because unlike other mammals even a person of average intelligence with sufficient effort and proper guidance can walk the path of dharma and become liberated from the cycle of rebirth. The motive force in the process of material incarnation and becoming (popularly known as 'life') is attachment to and identification with matter. This ignorance gives rise to the volitional factors which are called sankharas. These sankharas through the infinite possibilities of worldly desires propel the human being through the pattern of repeated birth and death until the dawning of wisdom (awakening) brings about the desire for liberation.

According to Buddha's teaching the soul (as that structure of sankharas that gives rise to incarnation and animates the body during 'life') is not a fixed entity but in a state of constant flux - being modified over time by actions of body, speech and mind. The constant transmutation and interdependence of phenomena mean that nothing can be said in terms of ultimate truth to have a fixed identity. This is the doctrine of anatta, the no-self doctrine applying to all phenomena (see Three marks of existence).

Liberation in Buddhism is achieved when the stock of accumulated sankharas buried in the unconscious have been dissolved through the practise of the Noble Eightfold Path, a path leading to the experience called enlightenment (Bodhi in Sanskrit and Pali). At enlightenment all the causes for future rebirth have been deleted and the sage abides in a state of being called deathlessness (Amaravati or Amrta). Such a one - called an arahant or Buddha is no longer destined for reincarnation after death.

In Tibetan Buddhism, an enlightened spiritual teacher (lama) may choose to reincarnate after death in order to continue to help people. Such a teacher is called a tulku.

According to Tulku Thondup,[5] there are three main types of tulkus. They are the emanations of buddhas, the manifestations of highly accomplished adepts, and rebirths of highly virtuous teachers or spiritual friends. There are also authentic secondary types as well which include unrecognized tulkus, blessed tulkus, and tulkus fallen from the path. 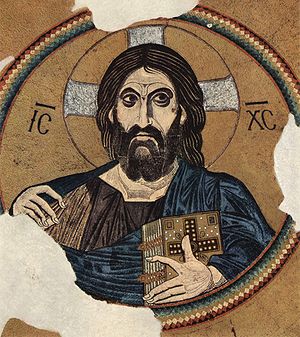 The Incarnation of Christ is a central Christian doctrine that God became flesh, assumed a human nature, and became a man in the form of Jesus Christ, the Son of God and the second person of the Trinity. This foundational Christian position holds that the divine nature of the Son of God was perfectly united with human nature in one divine Person, Jesus, making him both truly God and truly man. The theological term for this is hypostatic union: the Second Person of the Trinity, God the Son, became flesh when he was miraculously conceived in the womb of the Virgin Mary.[6] Biblical passages traditionally referenced in connection with the doctrine of the Incarnation include John 1:14, Colossians 2:9, and Philippians 2:7-8.

In Hinduism, incarnation generally refers to an avatar of Vishnu or Ganesha. Collectively, the 10 avatars of Vishnu are known as the dashavatara.

Mainstream Islam completely rejects the doctrine of the incarnation of God in any form, as the concept is defined as shirk. In mainstream Islam God is one and "neither begets nor is begotten".[7] Islam specifically rejects the Christian idea of Jesus as a divine incarnation, but rather Jesus is seen as a prophet (nabī) and messenger (rasūl) of God. The Qur'anic text itself seems to fully reject this concept according to mainstream interpretations. Sunni Islam is the most prominent sect to hold this belief.

Most Shiites do not hold the view that Muhammad's son-in-law Imam Ali was God incarnate.The major conflict source between Sunnis and Shias is the Shias' belief that Imam Ali was the real caliph after Muhammad and accepting "The Twelve Imams" as heirs of his "welayah" (rule). However, the Wahabi Muslims believe that some tales about some Shia's belief in incarnation create a division between Shias and Sunnis (both of whom they call brothers in the Quran). They also accuse the Shias of worshiping metals and woods (in fact the Shias only use them as "tabarrok" ("blesseds"/"blessed things"), just like "Hazrat-e Zahra" had used "tabarrok" first. In Shia philosophy, tabarrok is for showing your love to "Ahl al-Bayt" ("household", the community of the devotees of Ali and Fatima) and requesting "shafa'at" (healing) from them because they believe that ahle beyt where the best God created and they use this method to have a better connection to Allah or to request "maghferat" (forgiveness) from God when they want to atone for sins and believe its an easier approach.

The Aga Khan is the Imam (spiritual leader) of the Ismā'īlīs who believe that he possesses the "Light Of God" (Nūr) within him and is therefore God's designated repository of His Word, the Qur'an. As such only "he fully knows the Qur'an in its complete context" in which it was revealed to Prophet Mohammad over a span of 22 long and hard years. The Ismailis contend that to read the Quran without knowing the context (circumstance) under which each and every Ayat (verse) was delivered to Prophet Mohammed, is simply to be lead astray.

There is a Hadith of the Prophet stating, "Ali and I are from the same Nūr". The Aga Khan being the direct descendant of Prophet Mohammad through Imam Ali and Fatima az-Zahra (the daughter of Prophet Mohammad and wife of Imam Ali), the Nūr has been passed down through them to him.

The Nūr is an aspect of the Ismā'īlī belief in the concept of "God's incarnation" as a human being living incognito among human beings on this earth.

The founder of the US-based black nationalist Nation of Islam, Wallace Fard Muhammad, is believed by followers to be an incarnation of God, also considered to be the Messiah of Christianity and Mahdi of Islam, while other sects of Muslims strongly oppose this belief.

However, some Hasidim believe in a somewhat similar concept. Rabbi Menachem Mendel Schneerson, a prominent Hasidic leader, said that the Rebbe is God's essence itself put into a body of a Tzaddik.[9] While many other Jews find this idea highly controversial, panentheism, i.e. considering everything and everyone as manifestations of God, is the accepted mainstream Hasidic and Kabbalistic doctrine.

The Kabbalah has an idea of gilgul (reincarnation) as part of the soul's journey to achieve perfection.

The Rastafari movement views Haile Selassie I as God incarnate, who has come the second time as a deliverer.

Serer religion rejects any notion of an incarnation or manifestation of Roog (the supreme deity in Serer religion), called Koox among the Cangin. However, the reincarnation (ciiɗ)[10] of the ancient Serer saints and ancestral spirits, called Pangool, is a well held principle in Serer religion. These Pangool (singular : Fangool) act as intermediaries between the living world and the Devine. When the Serers speak of incarnation, it is these Pangool they refer to, who are themselves holy by virtue of their intercession with the Divine.[10][11][12]