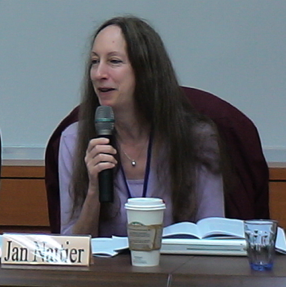 Jan Nattier is a translator and scholar of Mahāyana Buddhism. She earned a PhD in Inner Asian and Altaic Studies from Harvard University (1988), and subsequently taught at Stanford, Indiana University (1992–2005), and the International Research Institute for Advanced Buddhology, Soka University (2006–2010).[1]

As a translator, she has worked in most of the Buddhist source languages.[2]

Nattier published a book based on her PhD thesis which looked at the Chinese Doctrine of the Three Ages with a focus on the third i.e. Mofa (Chinese: 末法; pinyin: Mò Fǎ) or Age of Dharma Decline. She showed that the latter was a Chinese development with no India parallel. The translation and study of the Ugraparipṛcca [3] published as A Few Good Men: The Bodhisattva Path according to The Inquiry of Ugra (Ugraparipṛcchā) in 2003 also contained an extended essay on working with ancient Buddhist texts, particularly in Chinese.

Nattier's notable articles include a study of the Akṣobhyavūhya pureland texts,[4] which asserts the early importance of this strand of Mahāyāna ideology; an evaluation of early Chinese Translations of Buddhist texts and the issue of attribution[5] (which summarises several earlier articles on the subject); and a detailed re-examination of the origins of the Heart Sutra (1992) which proposes that the sutra was composed in China.

Nattier married scholar John R McRae (1947–2011) who has been called "one of the most important US researchers in the area of Chinese Chan-Buddhism." [7]