Procession of king Suddhodana from Kapilavastu, proceeding to meet his son the Buddha walking in mid-air (head raised at the bottom of the panel), and to give him a Banyan tree (bottom left corner).[1] The dream of Maya at the top of the panel is a sure marker of Kapilavastu. Sanchi. 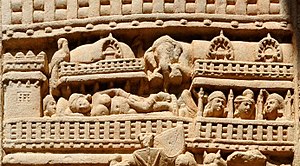 Maya's dream of an elephant during her conception of the Buddha, an identifier of the city of Kapilavastu.

Kapilavastu was an ancient city on the Indian subcontinent which was the capital of Shakya. King Śuddhodana and Queen Māyā are believed to have lived at Kapilavastu, as did their son Prince Siddartha Gautama until he left the palace at the age of 29.[2] Buddhist texts such as the Pāli Canon claim that Kapilavastu was the childhood home of Gautama Buddha, on account of it being the capital of the Shakyas, over whom his father ruled.[2] Kapilavastu is the place where Siddhartha Gautama spent his 29 years of his life.

The 19th-century search for the historical site of Kapilavastu followed the accounts left by Faxian and later by Xuanzang, who were Chinese Buddhist monks who made early pilgrimages to the site.[3][4][5][6] Some archaeologists have identified present-day Tilaurakot, Nepal, while some others have identified present-day Piprahwa, India as the location for the historical site of Kapilavastu,[7][8] the seat of governance of the Shakya state that would have covered the region. Both sites contain archaeological ruins.[9][10][11][12]