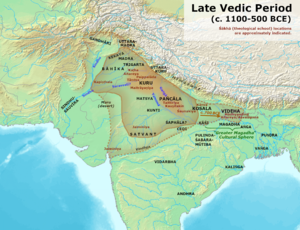 Kosal and other kingdoms of the late Vedic period. 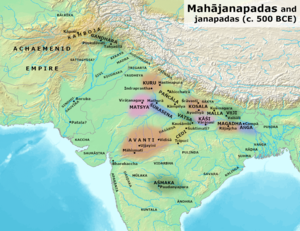 Kosal and other Mahajanapada in the Post Vedic period.

Kingdom of Kosala (c. 7th century BCE–c. 5th century BCE) was an ancient Indian kingdom with a rich culture, roughly corresponding the present-day region of Awadh[1] in Uttar Pradesh. It emerged as a small state during the late Vedic period, with connections to the neighbouring realm of Videha.[2][3] Kosala belonged to the Northern Black Polished Ware culture (c. 700–300 BCE),[4] and the Kosala region gave rise to the Sramana movements, including Jainism and Buddhism.[5]

During the 5th century BCE, Kosala incorporated the territory of the Shakya clan, to which the Buddha Shakyamuni belonged. According to the Buddhist text Anguttara Nikaya and the Jaina text, the Bhagavati Sutra, Kosala was one of the Solasa (sixteen) Mahajanapadas (powerful realms) in 6th to 5th centuries BCE,[6] and its cultural and political strength earned it the status of a great power. It was later weakened by a series of wars with the neighbouring kingdom of Magadha and, in the 5th century BCE, was finally absorbed by it. After collapse of the Maurya Empire and before the expansion of the Kushan Empire, Kosala was ruled by the Deva dynasty, the Datta dynasty, and the Mitra dynasty.