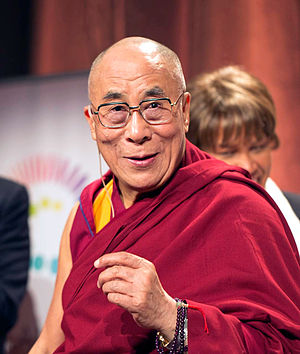 Historically, the Dalai Lamas have served as the political leaders of the Tibetan state, and they were also respected as spiritual leaders. But contrary to common misperceptions in the West, religious life in Tibetan Buddhism is not organized heirarchically. For example, unlike the Pope of the Catholic church, who appoints cardinals and bishops to run the affairs of the church, the Dalai Lama does not appoint the heads of monasteries, lineages, or other institutions. In addition, unlike the Pope, the Dalai Lama does not issue decrees or promulgate new teachings that other Buddhists are expected adopt.

The monastic institutions in Tibetan Buddhism are self-organized and depend for their support on their local community. They are usually associated with one of the main schools of Tibetan Buddhism. While all the major schools in Tibet share a core set of teachings, each school also includes a unique teaching lineage that is traced back to particular teachers. Each of the main schools also have their own "study colleges" (shedras), where they train scholars following a curriculum particular to that school. Some scholars will train at more than one "study college", and hence become proficient in the teachings of multiple schools.

...the Buddhist community is not organized in a hierarchical manner as, for example, in the Catholic Church, where priests must account for their behavior to the bishops, cardinals and eventually, at the top of the pyramid, to the Pope himself. Buddhist schools, as these have emerged in different countries are institutionally completely independent of each other. And even within the fold of Tibetan Buddhism, the patriarchs of the four principal schools—while being respected as spiritual authorities—do not intervene in the administration of the monasteries, which function as autonomous entities.

Among Tibetan masters, H.H. the XIVth Dalai Lama is clearly the object of unanimous respect. The teachings and advice that he gives may well be the source of profound inspiration but they are never regarded as commands. No authoritative body goes to check whether a given monastery actually implements his advice.[1]

Heads of the main schools of Tibetan Buddhism

Head of the Gelugpa school

The head of the Gelugpa school is the Ganden Tripa who is appointed by a democratic process for seven years.

Head of the Karmapa school

The head of the Karmapa school is the Karmapa. The Karmapa serves for life, and a new Karmapa is traditionally selected by finding the rebirth of the previous Karmapa.

Head of the Sakya school

Head of the Nyingmapa school

The head of the Nyingmapa rotates between the leaders of the six Nyingmapa lineages, with a new head chosen every three years.

The Nyingmapa school did not have an official leader prior to the formation of the Central Tibetan Administration (the Tibetan government in exile) in 1960. The position of the “Supreme Head” of the Nyingmapas was established at this time in order to represent the school within the Tibetan administration.[3]

Head of the Bon tradition

The oldest spiritual tradition in Tibet is the Bon tradition They don't follow the historical Buddha as such, rather, they say that their founder is “Buddha Shenrab. He is said to have been born in the mythical land of Olmo Lung Ring, whose exact location remains something of a mystery. “ They say that their teachings date back to a Buddha who lived before Buddha Shakyamuni. The Dalai Lama has “stressed the importance of preserving the Bön tradition, as representing the indigenous source of Tibetan culture, and acknowledging the major role it has had in shaping Tibet's unique identity.”

There are only a few Bon remaining outside of Tibet, though it had more than three hundred monasteries in Tibet before the Chinese invasion. Their senior teacher is Lopön Tenzin Namdak Rinpoche.

The role of the current Dalai Lama

The 14th Dalai Lama currently lives in exile in India. He has retired from a political role, but he still offers spiritual guidance to the Tibetan Buddhist community.

He is one of the teachers who has mastered the academic teachings of all the major Buddhist lineages in Tibet as well as carrying the transmissions for many practices from different schools that need to be passed on personally from teacher to pupil. He is however not unique in that respect.

The Dalai Lama is closely associated with the Gelugpas and with particularly with the founder of the Gelugpa lineage, Tsongkhapa, but has close assocations with other traditions as well.

Dalai lamas and their line of reincarnation

The Dalai Lamas follow a line of reincarnation which normally means there’s a gap between the death of the previous Dalai Lama and the coming of age of the next Dalai Lama, as he has to take birth and then grow up to adulthood.

Relationship with the Panchen lama 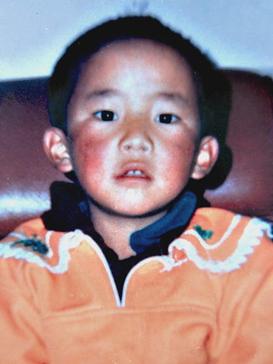 But the Panchen Lama chosen by our current Dalai Lama and his delegation in Tibet disappeared from public view aged six. This is him as he was soon before he disappeared:

He was taken into custody by the Chinese aged 6, who said they needed to protect him, along with his parents, making him the world’s youngest political prisoner at the time. He should now be 27 (as of spring 2017). The Chinese say that he is in good health and happy, but have not let anyone confirm that he is alive and well, and he has now been missing for over 21 years, in this sense that the Chinese have not permitted any contact with anyone even to confirm that he is still alive.

At the time that he disappeared, the Chinese chose their own version of the Panchen Lama which the Dalai Lama doesn’t recognize.

In an interview from April 2018, the Dalai Lama said that according to reliable information Gedhun Nyima is still alive and continuing a normal education. He also said of the Chinese selection, Gyancain Norbu, that he has studied well under the guidance of one good teacher. He also says that there can be more than one reincarnation of a lama - only one for the seat, but others that are also reincarnations.