Information on Linji is based on the Línjì yǔlù (臨濟語錄; Japanese: Rinzai-goroku), the Record of Linji. The standard form of these sayings was not completed until 250 years after Linji's death and likely reflect the teaching of Chán in the Linji school at the beginning of the Song Dynasty rather than those of Linji's in particular.[1]

This contains stories of his interactions with teachers, contemporaries, and students. The recorded lectures are a mixture of the conventional and the iconoclastic. Despite the iconoclasm, the Línjì yǔlù reflects a thorough knowledge of the sutras. Linji's teaching-style, as recorded in the Línjì yǔlù, was exemplary of the development Chán took in the Hongzhou school (洪州宗) of Mazu and his successors, such as Huangbo, Linji's master.

According to the Línjì yǔlù, Linji was born into a family named Xing (邢) in Caozhou (modern Heze in Shandong), which he left at a young age to study Buddhism in many places.

Also according to the Línjì yǔlù, Linji was trained by the Chan master Huángbò Xīyùn (黃蘗希運), but attained kensho while discussing Huángbò's teaching during a conversation with the reclusive monk Dàyú (大愚). Linji then returned to Huángbò to continue his training after awakening. In 851 CE, Linji moved to the Linji temple in Hebei, where he took his name, which also became the name for the lineage of his form of Chán Buddhism. 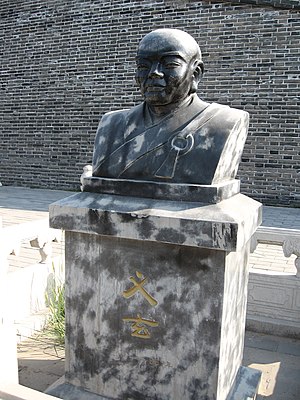 A statue of Linji Yixuan under the southern gate of Zhengding Hebei, China
Main articles: Zen and Chinese Chán

Linji is reputed for being iconoclastic, leading students to awakening by hitting and shouting.[2]

Chán faced the challenge of expressing its teachings of "suchness" without getting stuck into words or concepts. The alleged use of shouting and beating was instrumental in this non-conceptual expression - after the students were well-educated in the Buddhist tradition.[3]

Linji is described as using The Three Mysterious Gates to maintain the Chán emphasis on the nonconceptual nature of reality, while employing sutras and teachings to instruct his students:[3]

A well known Kōan by Linji is:

If you meet the Buddha, kill him. (逢佛殺佛)

Thinking about the Buddha as an entity or deity is delusion, not awakening. One must destroy the preconception of the Buddha as separate and external before one can become internally as their own Buddha. Zen master Shunryu Suzuki wrote in Zen Mind, Beginner's Mind during an introduction to Zazen,

One is only able to see a Buddha as he exists in separation from Buddha; the mind of the practitioner is thus still holding onto apparent duality.

The titular story of Volume 2 of Kazuo Koike & Goseki Kojima's manga comic Lone Wolf and Cub revolves around Linji's saying "if you meet a buddha, kill the buddha," in which the protagonist must overcome his self to assassinate a living buddha.