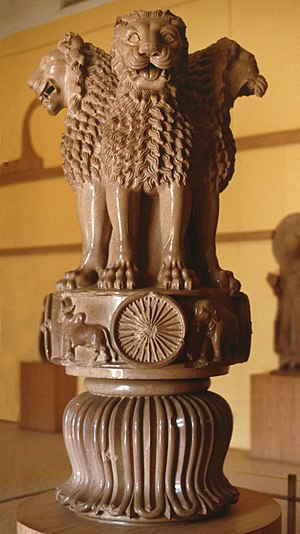 Four lions stand back to back on the top of the pillar, representing the Four Noble Truths. A Dharma wheel appears in relief below each lion. Between the wheels appear four animals in profile—horse, bull, elephant, and lion. The architectural bell below the abacus, is a stylized upside-down lotus

The Lion Capital of Ashoka is the capital, or head, of a column erected by the Mauryan emperor Ashoka in Sarnath, India, c. 250 BCE. Ashoka erected the column to commemorate the site of Gautama Buddha's first sermon some two centuries earlier.

Its crowning features are four life-sized lions set back to back on a drum-shaped abacus, representing the four noble truths. The side of the abacus is adorned with wheels in relief, and interspersing them, four animals, a lion, an elephant, a bull, and a galloping horse follow each other from right to left. A bell-shaped lotus forms the lowest member of the capital, and the whole 2.1 metres (7 ft) tall, carved out of a single block of sandstone and highly polished, was secured to its monolithic column by a metal dowel.

The capital eventually fell to the ground and was buried. It was excavated by the Archeological Survey of India (ASI) in the very early years of the 20th century. The column, which had broken before it became buried, remains in its original location in Sarnath, protected but on view for visitors. The Lion Capital was in much better condition, though not undamaged. It was cracked across the neck just above the lotus, and two of its lions had sustained damage to their heads. It is displayed not far from the excavation site in the Sarnath Museum, the oldest site museum of the ASI.

In July 1947, Jawaharlal Nehru, the interim prime minister of India, proposed in the Constituent Assembly of India that the wheel on the abacus be the model for the wheel in the centre of the Dominion of India's new national flag, and the capital itself without the lotus the model for the state emblem of India. The proposal was accepted in December 1947.