Since ancient India until modern times, it has been common for traditions, groups and individuals to be influenced by more than one textual school or tradition. For example:

When Buddhism spreads it tends not to eradicate existing beliefs but to incorporate them, along with local gods and spirits, into its own cosmology. It is quite common to find Buddhists at the village level [in Southeast Asia] turning to the local gods for solutions to everyday problems – such as curing an illness or finding a marriage partner – and to Buddhism for answers to the larger questions about human destiny.[1]

Contemporary scholar Rupert Gethin identifies the following areas of Buddhist thought and practice that are common to all major traditions of Buddhism:[3] 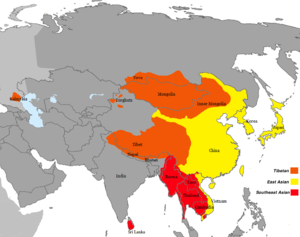 There is no standard naming convention for the major historical living traditions of Buddhism. However, most contemporary Buddhist scholars identify three main traditions: [4] [note 2]

Within these major traditions, there are a variety of smaller traditions and sects.