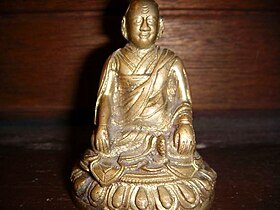 Longchen Rabjam Drimé Özer (Tibetan: ཀློང་ཆེན་རབ་འབྱམས་པ་དྲི་མེད་འོད་ཟེར།, Wylie: klong chen rab 'byams pa dri med 'od zer), commonly abbreviated to Longchenpa (1308–1364, an honorific meaning "The Vast Expanse") was the greatest scholar yogi of the Nyingma school of Tibetan Buddhism.[1] According to David Germano, Longchenpa's work led to the dominance of the Nyingthig lineage of Dzogchen over the other Dzogchen traditions.[2] He is also responsible for the scholastic systematization of Dzogchen thought within the context of the wider Tibetan Vajrayana tradition of philosophy which was highly developed at the time among the Sarma schools.[2] Germano also notes that Longchenpa's work is "generally taken to be the definitive expression of the Great Perfection with its precise terminological distinctions, systematic scope, and integration with the normative Buddhist scholasticism that became dominant in Tibet during the thirteenth and fourteenth centuries."[3]

Longchenpa is known for his voluminous writings, including the highly influential Seven Treasuries and his compilation of Dzogchen scripture and commentaries, the Nyingthig Yabshi (The Inner Essence in Four Parts).[4][5] Longchenpa was also a terton (treasure revealer) and some of his works, like the Khadro Yangtig, are considered terma (revealed treasures).[6] Longchenpa's oeuvre (of over 270 texts) encapsulates the core of Nyingma thought and praxis and is a critical link between the school's exoteric (or sutra) and esoteric (i.e. tantric) teachings. Longchenpa's work also unified the various Dzogchen traditions of his time into a single system.[7] Longchenpa is also known for his skill as a poet and his works are written in a unique literary voice which was widely admired and imitated by later Nyingma figures.[8]

Longchenpa was the abbot of Samye, one of Tibet's most important monasteries and the first Buddhist monastery established in Tibet. However, he spent most of his life travelling or in retreat.