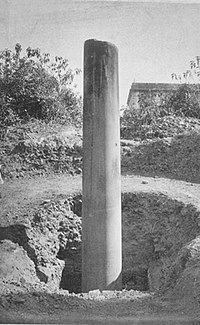 listen (help·info), "the lovely") is considered to be the birthplace of the Buddha in the Buddhist tradition. The site is located in the Rupandehi District in Nepal.

According to Buddhist tradition, it is the place where Queen Mayadevi gave birth to Siddhartha Gautama in 563 BCE.[1][2]

Lumbini is an important pilgrimage site for Buddhist pilgrims.

Lumbini has a number of temples, including the Mayadevi Temple and several others which are still under repair. Many monuments, monasteries and a museum, the Lumbini International Research Institute, are also within the holy site. Also there is the Puskarini, or Holy Pond, where the Buddha's mother took the ritual dip prior to his birth and where he had his first bath. At other sites near Lumbini, earlier Buddhas were, according to tradition, born, then achieved ultimate Enlightenment and finally relinquished their earthly forms.