From Encyclopedia of Buddhism
(Redirected from Mūlamadhyamakakārikā)
Jump to: navigation, search 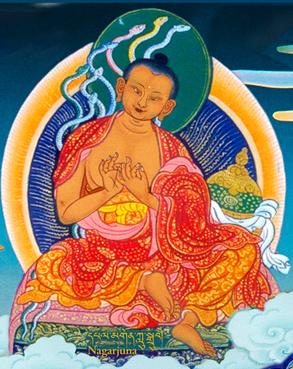 This text belongs to Nagarjuna’s Collection of Middle Way Reasoning.

Alternate names for the text

The main topic of The Fundamental Wisdom of the Middle Way is emptiness. In fact, the terms Middle Way and emptiness are synonyms. Middle Way means that the true nature of the phenomena we experience lies in the middle, between all possible extremes that can be conceived of by the intellect. The true nature of reality cannot be described by any conceptual fabrication, by any conventional term or expression. Thus, it is not existent, not nonexistent, not something, not nothing, not permanent, not extinct; it is not the lack of these things, and it is not even the middle in between them, for that is a conceptually fabricated extreme as well. The true nature of reality transcends all the notions we could ever have of what it might be. This is also the ultimate understanding of the second turning’s description of emptiness. Emptiness ultimately means that genuine reality is empty of any conceptual fabrication that could attempt to describe what it is.

The path leading to the direct realization of this inconceivable, genuine nature of reality begins with gaining certainty in this profound view of emptiness. This is an essential first step because it is not enough just to read the teachings that say, “All phenomena are emptiness; the nature of reality is beyond concept,” and, without knowing the reasons these teachings are accurate, to accept them on blind faith alone. If we do, we will not remove our doubts, and our mere opinion that the teachings are valid will not do us any good when these doubts come to the surface. When we gain certainty in the teachings on emptiness, however, then it will be impossible for doubts to arise.

The way that Nagarjuna helps us to gain such certainty is through the use of logical reasoning.[2]

The central topic of the text is emptiness--the Buddhist technical term for the lack of independent existence, inherent existence, or essence in things. Nagarjuna relentlessly analyzes phenomena or processes that appear to exist independently and argues that they cannot so exist, and yet, though lacking the inherent existence imputed to them either by naive common sense or by sophisticated, realistic philosophical theory, these phenomena are not nonexistent--they are, he argues, conventionally real.

This dual thesis of the conventional reality of phenomena together with their lack of inherent existence depends upon the complex doctrine of the two truths or two realities--a conventional or nominal truth and an ultimate truth--and upon a subtle and surprising doctrine regarding their relation. It is, in fact, this sophisticated development of the doctrine of the two truths as a vehicle for understanding Buddhist metaphysics and epistemology that is Nagarjuna's greatest philosophical contribution. If the analysis in terms of emptiness is the substantial heart of Mulamadhyamikakarika, the method of reductio ad absurdum is the methodological core. Nagarjuna, like Western skeptics, systematically eschews the defense of positive metaphysical doctrines regarding the nature of things, demonstrating rather that any such positive thesis is incoherent, and that in the end our conventions and our conceptual framework can never be justified by demonstrating their correspondence to an independent reality. Rather, he suggests, what counts as real depends precisely upon our conventions.

For Nagarjuna and his followers, this point is connected deeply and directly with the emptiness of phenomena. That is, for instance, when a Madhyamika philosopher says of a table that it is empty, that assertion by itself is incomplete. It invites the question, "empty of what?" And the answer is: "empty of inherent existence, or self-nature, or, in more Western terms, essence." Now, to say that the table is empty is hence simply to say that it lacks essence and, importantly, not to say that it is completely nonexistent. To say that it lacks essence, the Madhyamika philosopher will explain, is to say, as the Tibetans like to put it, that it does not exist "from its own side"--that its existence as the object that it is, as a table, depends not only upon it or on any purely nonrelational characteristics, but upon us as well. That is, if this kind of furniture had not evolved in our culture, what appears to us to be an obviously unitary object might instead be correctly described as five objects: four quite useful sticks absurdly surmounted by a pointless slab of stick-wood waiting to be carved. It is also to say that the table depends for its existence on its parts, on its causes, on its material, and so forth. Apart from these, there is no table. The table, we might say, is a purely arbitrary slice of space-time chosen by us as the referent of a single name, and not an entity demanding, on its own, recognition and a philosophical analysis to reveal its essence. That independent character is precisely what it lacks, on this view.[3]

Sri-Lankan born scholar David Kalupahana examined this text in relation to the views of the Early Buddhist Schools. One colleauge wrote of Kaluphana's work:

David translated Nāgārjuna’s Mūlamadhyamakakārikā with a substantial critical introduction. In it he argued that this text, which is regarded as representing the high watermark of Mahāyāna thinking in India, can be usefully situated within the axiomatics of early Buddhism. Far from deviating from the tenets of early Buddhism, it was a return to them.[4]

...not only a grand commentary on the Buddha's discourse to Kaccayana, the only discourse cited by name, but also a detailed and careful analysis of most of the important discourses included in the Nikayas and the agamas, especially those of the Atthakavagga of the Pali Canon.[5]

According to Kalupahanna, in this work,

Utilizing the Buddha's theory of "dependent arising" (pratitya-samutpada), Nagarjuna demonstrated the futility of [...] metaphysical speculations. His method of dealing with such metaphysics is referred to as "middle way" (madhyama pratipad). It is the middle way that avoided the substantialism of the Sarvastivadins as well as the nominalism of the Sautrantikas.[6]

The Mulamadhyamaka-karika consists of twenty-seven chapters.

Each [chapter] is itself a commentary on a different statement made by the Buddha in the sutras comprising the second turning of the wheel of Dharma. Nagarjuna proves the validity of the Buddha’s teachings with logical reasoning. The chapters also answer the successive arguments put to Nagarjuna by those who believed that things truly exist. In each chapter, Nagarjuna would successfully refute one such argument; his opponents would then come up with another argument that they thought proved that things were real, and Nagarjuna would refute that, and so on—that is why there are twenty-seven chapters! They are all very beneficial to us because they help us to overcome our own doubts, the same doubts that Nagarjuna’s opponents had.[2]

The twenty-seven chapters are:

Neither from itself nor from another,
Nor from both,
Nor without a cause,
Does anything whatever, anywhere arise.[7]

Not from self, not from other,
Not from both, nor without cause:
Things do not arise
At any place, at any time.[8]

Not from itself, nor from another,
Not from both, nor without a cause,
Does anything anywhere ever arise.[9]

No thing anywhere is ever born from itself, from something else, from both or without a cause.[10]

No entities whatsoever are found anywhere that have arisen from themselves, from another, from both themselves and another, or from no cause at all.[11]

To say "it is" is to grasp for permanence.
To say "it is not" is to adopt the view of nihilism.
Therefore a wise person
Does not say "exists" or "does not exist".[12]

There is no nirvana to be produced
And no samsara to be cleared away.
In essential reality, what samsara is there?
What is there that can be called nirvana?[14]

Whatever is dependently co-arisen
That is explained to be emptiness.
That, being a dependent designation,
Is itself the middle way.

Something that is not dependently arisen
Such a thing does not exist.
Therefore a non-empty thing
Does not exist.[16]

Whatever is the end of Nirvana, that is the end of Samsara.
There is not even a very subtle slight distinction between the two.[17]

It is said there were eight important commentaries on the text in India, but only four of them have been translated into Tibetan and subsequently found their way into the Tengyur.

The complete text of Stephen Batchelor's translation is available at these sites:

Because of the high degree of similarity between the Mūlamadhyamakakārikā and Pyrrhonism, particularly the surviving works of Sextus Empiricus.[19] Contemporary scholar Thomas McEvilley suspects that Nagarjuna was influenced by Greek Pyrrhonist texts imported into India. However, since Pyrrho of Elis is known to have visited India, it is also suspected that his formulation of the Three Marks of Existence and the tetralemma was influenced by Buddhist and Jain philosophers (the so-called gymnosophists) from whom he is known to have learnt during his travels to India.[20]