This text is also known as:

In Tibet it is considered to be a member of the Carya class of tantras. In Japan where it is known as the Mahāvairocana Sūtra (Daibirushana jōbutsu jinpen kajikyō), it is one of two central texts in the Shingon school, along with the Vajrasekhara Sutra. Both are also part of the Tendai school. 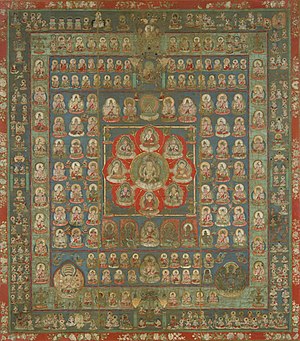 A major commentary by Buddhaguhya was written in about 760 and is preserved in Tibetan. Hodge translates it into English alongside the text itself.

Kūkai learned of the Mahāvairocana Tantra in 796, and travelled to China in 804 to receive instruction in it.

The Mahāvairocana Tantra consists of three primary mandalas corresponding to the body, speech and mind of Mahāvairocana, as well as preliminary practices and initiation rituals. According to Buddhaguhya’s Piṇḍārtha (a summary of the main points of the tantra) the Mahāvairocana Tantra system of practice is in three stages: preliminary, application, and accomplishment. Attached here and there are doctrinal passages, and sadhana practices which relate back to the main mandalas.

The following outline is based on Hodge's translation of the Tibetan version of the Sutra. The Chinese version has differences in the order of the chapters.

The Mahavairocana Tantra does not trace its lineage to Shakyamuni Buddha, the founder of Buddhism. Instead it comes directly from Mahavairocana. The lineage then being, according to the Shingon tradition:

Within the vision of the Mahavairocana Sutra, the state of bodhi (Awakening / Enlightenment) is seen as naturally inherent to the mind - the mind's natural and pure state (as in Dzogchen and Tathagatagarbha) - and is viewed as the perceptual sphere of non-duality, where all false distinctions between a perceiving subject and perceived objects are lifted and the true state of things (non-duality) is revealed. This is also the understanding of Enlightenment found in Yogacara Buddhism. To achieve this vision of non-duality, it is necessary to recognise one's own mind. Writing on the Mahavairocana Sutra, Buddhist scholar and translator of that scripture, Stephen Hodge, comments:[5]

... when the MVT [i.e. Mahavairocana Tantra] speaks of knowing your mind as it truly is, it means that you are to know the inherent natural state of the mind by eliminating the split into a perceiving subject and perceived objects which normally occurs in the world and is wrongly thought to be real. This also corresponds to the Yogacara definition ... that emptiness (sunyata) is the absence of this imaginary split. ... We may further elucidate the meaning of Perfect Enlightenment and hence of the intrinsic nature of the mind by correlating terms [which Buddhist commentator on the Mahavairocana Sutra,] Buddhaguhya, treats as synonyms. For example, he defines emptiness (sunyata) as suchness (tathata) and says that suchness is the intrinsic nature (svabhava) of the mind which is Enlightenment (bodhi-citta). Moreover, he frequently uses the terms suchness (tathata) and Suchness-Awareness (tathata-jnana) interchangeably. But since Awareness (jnana) is non-dual, Suchness-Awareness is not so much the Awareness of Suchness, but the Awareness which is Suchness. In other words, the term Suchness-Awareness is functionally equivalent to Enlightenment. Finally, it must not be forgotten that this Suchness-Awareness or Perfect Enlightenment is Mahavairocana [the Primal Buddha, uncreated and forever existent]. In other words, the mind in its intrinsic nature is Mahavairocana, whom one "becomes" (or vice-versa) when one is perfectly enlightened.

The text also speaks of how all things can be accomplished once 'non-dual union with emptiness' is attained.[6]

Yet ultimately even emptiness needs to be transcended, to the extent that it is not a vacuous emptiness, but the expanse of the mind of Buddha, Buddhic Awareness and Buddha-realms, all of which know of no beginning and no arising - as Stephen Hodge points out:

Finally, though one has realized the true emptiness of the individual and phenomena, one does not yet realize that the natural state of mind is the Tathagata's inherent Awareness and that it is the all-pervasive Body of Vairocana with all the manifested Buddha realms. Therefore one must transcend even emptiness with the emptiness of emptiness, when it is seen that the mind is primordially unborn and unarisen.[7]

The sutra later reinforces the notion that Emptiness is not mere inert nothingness but is precisely the unlocalised locus where Vairocana resides. Vajrapani salutes the Buddha Vairocana with the following words:

I salute you who are bodhicitta [Awakened Mind]!

I salute you who are the source of Enlightenment! [...]
I bow to you who reside in emptiness!'[8]

I who am mighty have been renowned as the Great Hero. I directly realized that there is no arising, and abandoned the perceptual range of words; I became free from all faults, and separated from causes and conditions.[9]