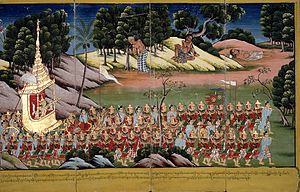 Prince Siddhattha sees the three signs, an old man, a sick man and a corpse, that lead to his renunciation of secular life.

Maraṇasati (mindfulness of death, death awareness) is a Buddhist meditation practice that uses various visualization and contemplation techniques to meditate on the nature of death. The cultivation of Maranassati is said to be conducive to right effort and also helps in developing a sense of spiritual urgency (Saṃvega) and renunciation (Nekkhamma).[1]

Mindfulness of death is a common practice in Southeast Asian Buddhist monasteries.[1] Buddhist monasteries such as Wat Pah Nanachat will often have human skeletons on display in the meditation hall.[2] The Satipatthana Sutta (MN: 10) and the Kayagata-sati Sutta (MN: 119) include sections on the cemetery contemplations which focus on nine stages of corpse decomposition (Pali: nava sīvathikā-manasikāra). These are:

The Satipatthana Sutta instructs the meditator to reflect thus: 'This body of mine, too, is of the same nature as that body, is going to be like that body, and has not got past the condition of becoming like that body.'

Illustration of a Tibetan Cham dance of skeleton spirits, who serve as a reminder of the presence of death

Mindfulness of death is a central teaching of Tibetan Buddhism: it is one of the "Four Thoughts," which turn the mind towards spiritual practice. One set of Tibetan Buddhist contemplations on death come from the eleventh century Buddhist scholar Atisha.[5] Atisha is said to have said to his students that if a person is unaware of death, their meditation will have little power.[6]

Other Tibetan Buddhist practices deal directly with the moment of death, preparing the meditator for entering and navigating the Bardo, the intermediate stage between life and death. This is the theme of the popular Great Liberation through hearing during the intermediate state (Tibetan Book of the Dead).