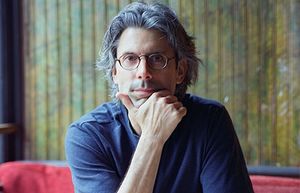 Mark Epstein (born 1953) is an American author and psychotherapist, who explores the relationship between Buddhist "psychology" and modern Western psychology. His first book, Thoughts Without a Thinker: Psychotherapy from a Buddhist Perspective, explored the relationship between modern psychology and the Buddhist understanding of the causes of suffering as presented in the Tibetan Wheel of Life. In his most recent book, The Trauma of Everyday Life, he interprets the Buddha’s spiritual journey as grounded in Buddha's personal childhood trauma.

According to an article in the New York Times, it took Epstein's mother ten years to recover from her first husband’s death and by the time she began to feel better he would be six or seven years old, exposing him to transgenerational trauma.[1]

Epstein is a graduate of Harvard College and the Harvard Medical School. After completing his psychiatry residency at what is now New York-Presbyterian Hospital/Weill Cornell Medical Center, he entered the private practice of psychiatry In New York City. He is a Clinical Assistant Professor of Psychiatry at New York University School of Medicine.

Epstein has been a practicing Buddhist since his early twenties, when he traveled to Ajahn Chah's forest Buddhist monastery near Bangkok, Thailand together with his American Buddhist teachers Joseph Goldstein, Jack Kornfield, and Richard Alpert.[2]

He is a contributing editor to Tricycle: The Buddhist Review and his books include Thoughts Without a Thinker, and Going to Pieces without Falling Apart. Both books deal with the difficult and counter-intuitive Eastern teachings of non-self.

In resisting trauma and in defending ourselves from feeling its full impact, we deprive ourselves of its truth.[3]