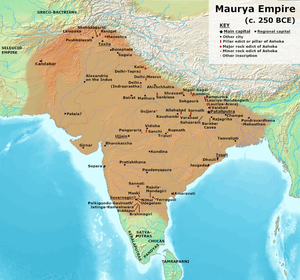 Maximum extent of the Maurya Empire, as shown by the location of Ashoka's inscriptions, and visualized by historians: Vincent Arthur Smith;[1] R. C. Majumdar;[2] and historical geographer Joseph E. Schwartzberg.[3]

The Maurya Empire, or the Mauryan Empire, was a geographically extensive historical power in the Indian Subcontinent based in Magadha. It was founded by Chandragupta Maurya in 322 BCE, and existed in loose-knit fashion until approximately 185 BCE.[4]

The empire reached its greatest extent during the reign of Ashoka the Great (ca. 268–232 BCE). During Ashoka's rule, the empire briefly controlled the major urban hubs and arteries of the Indian subcontinent excepting the deep south.[4] It declined for about 50 years after Ashoka's rule, and dissolved in 185 BCE with the assassination of Brihadratha by Pushyamitra Shunga and foundation of the Shunga Empire in Magadha.

Under the Mauryas, internal and external trade, agriculture, and economic activities thrived and expanded across South Asia due to the creation of a single and efficient system of finance, administration, and security. After the Kalinga War, the Empire experienced nearly half a century of centralized rule under Ashoka. Ashoka's embrace of Buddhism and sponsorship of Buddhist missionaries allowed for the expansion of that faith into Sri Lanka, northwest India, and Central Asia.[5]

The Arthashastra[6] and the Edicts of Ashoka are the primary sources of written records of Mauryan times. The Lion Capital of Ashoka (a sculpture of four lions back to back) at Sarnath is the national emblem of the Republic of India.