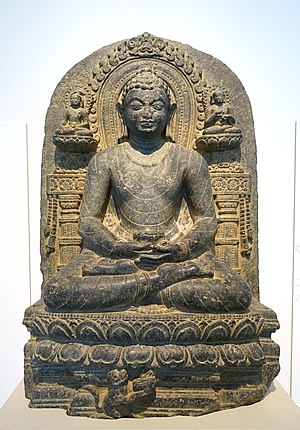 There are a variety of meditation practices within Buddhism.

There is no single term in Buddhism that directly corresponds to the English term "meditation." Two Sanskrit terms that are often translated as "meditation" are bhāvanā and yoga.[1]

Both of these terms are used to refer to a variety of types of spiritual practices, including meditation practices.

Two types of "meditation practices" (bhāvanā or yoga) that are essential within all Buddhist traditions are: "calm" (samatha) and "insight" (vipassana). Calm meditation entails the cultivation of mental concentration (samadhi) for the purpose of making the mind more calm and stable. Insight meditation is used to cultivate clarity and wisdom (prajna)

Two types of "meditation practices" (bhāvanā or yoga) recognized within all Buddhist traditions are:

The goal of Buddhist practice is to bring to an end the operation of these defilements (kleshas). The basic method is to restore to the mind something of its fundamental state of clarity and stillness. This clarity of mind provides the opportunity for seeing into the operation of the defilements and the mind’s true nature, for seeing things as they really are, for fully awakening. The way of returning the mind to its state of clarity is by the use of the techniques of calm meditation, which can temporarily suppress or block the immediate defilements that disturb the mind; the way of seeing clearly into the nature of the mind is by the methods of insight meditation, which, in association with calm, can finally eradicate those defilements.[1]

A variety of techniques or methods are used to facilitate meditation practice. The following techniques can be used to develop either calm (shamatha) or insight (vipassana) meditation:

The following terms are used to described states of meditative concentration that can be achieved through calm (samatha) meditation:

Some commonly cited traditional texts regarding meditation practices include: