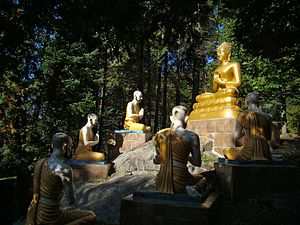 A depiction of the first teaching of the Buddha, in which he first presented the topic of the "middle way."

The Middle Way (Skt. madhyamapratipad; P. majjhimapaṭipadā; T. དབུ་མའི་ལམ་ dbu ma'i lam; C. zhongdao 中道) is a fundamental concept in Buddhist thought that refers to avoiding extremes on the path and in one's view of reality.

According to the tradition, in his first teaching (the Dhammacakkappavattana Sutta), the Buddha advocated a middle way that avoided the two extremes of self-indulgence or self-denial.[1] The Buddha then presented the Noble Eightfold Path as a path that follows the middle way.

In a later teaching (the Kaccayanagotta Sutta), the Buddha used the term middle way to describe a view that is free from the extremes of eternalism and nihilism.

After the passing of the Buddha, Buddhist scholars debated the the subtle implications of this middle-way view, eventually forming different schools of thought based on different interpretations. In the second or third century CE, the Buddhist scholar Nagarjuna presented a very refined interpretation of the middle-way view, and his writings formed the basis of the Madhyamaka or Middle-Way school, that became highly influential in the Mahayana traditions of Tibet and East Asia.

Middle way between self-indulgence and self-denial

In the life story of the Siddhartha Guatama (the future Buddha), it describes how as a child and young man, Siddhartha's father ensured that his every sensual desire was fulfilled. At this early stage of his life, Siddartha experienced the extreme of self-indulgence. He saw that this way of living could not bring him lasting happiness, and he became dissillusioned with his life as a royal prince. He then left his royal palace and sought knowledge through studying with several forest yogis. After studying meditation techniques with several different teachers, Siddhartha joined a group of five yogis who practiced a form of extreme asceticism. These yogis saw their physical bodies as an impediment to spiritual awakening, and they sought to overcome their attachment to sense pleasures by denying their bodies food and comfort. With these companions, Siddhartha practiced the extreme of self-denial.

Siddhartha practiced with these yogis for many years, until he was near the point of death from starvation. Sensing he was near death, he accepted a bowl of milk rice from a village girl Sujata, daughter of a local householder, who gave it as an offering thinking he was a tree spirit.[2] Upon drinking the nourishing milk, he had the realization that practicing extreme austerities would not lead to a spiritual awakening. Gradually, he developed the insight that the path to awakening must be a middle way between extreme indulgence in sense-pleasures and extreme austerities. It was at this point that he entered into a state of deep meditation that led to his awakening.

Thus, in the first recorded teaching that the Buddha gave after his awakening (the Dhammacakkappavattana Sutta), the first insight that he revealed was the middle way between the extremes of self-indulgence and self-denial. This concept was the underlying principle for the Noble Eightfold Path, which the Buddha presented as a path to awakening that followed the middle way.

Middle way between eternalism and nihilism

The middle way is also used to refer to the view that rejects the extreme views of eternalism (some things are permanently existing) and nihilism (nothing exists). This middle way view is closely related to other Buddhist concepts, such as: no-self (anatman) and dependent arising.

The two extreme views with regard to the self (atman) are:

In the Buddhist view, both of these assertions are not correct. They are said to be extreme views that should be rejected. The middle view asserts that self exists in relation to (or in dependence upon) other causes and conditions. In this view:

This understanding is presented in the doctrine of not-self (anatman).

But the absence of an eternal atman does not mean there is no-thing at all. Early Buddhism adheres to a realistic approach which does not deny existence as such, but denies the existence of eternal and independent substances. This view is the Middle Way between eternalism and annihilationism. Rupert Gethin states:

The understanding that sees a 'person' as subsisting in the causal connectedness of dependent arising is often presented in Buddhist thought as 'the middle' (madhyama/majjhima) between the views of 'eternalism' (śaśvata-/sassata-vāda) and 'annihilationism' (uccheda-vāda).[3][lower-alpha 1]

The Kaccayanagotta Sutta is an early Buddhist text in which the Buddha describes the middle way between extreme philosophical views.[lower-alpha 2] Contemporary scholar David Kalupahana states:

Two aspects of the Buddha's teachings, the philosophical and the practical, which are mutually dependent, are clearly enunciated in two discourses, the Kaccaayanagotta-sutta and the Dhammacakkappavattana-sutta, both of which are held in high esteem by almost all schools of Buddhism in spite of their sectarian rivalries. The Kaccaayanagotta-sutta, quoted by almost all the major schools of Buddhism, deals with the philosophical "middle path", placed against the backdrop of two absolutistic theories in Indian philosophy, namely, permanent existence (atthitaa) propounded in the early Upanishads and nihilistic non-existence (natthitaa) suggested by the Materialists.[4]

Within the Sanskrit Mahayana tradition, the Madhyamaka ("Middle Way") school of Nagarjuna refined the meaning of the middle way view between existence and non-existence.

While earlier Buddhist schools of thought accepted the middle way view that the self is neither existent nor non-existent, some schools still believed that there were truly existent small particles (called dharmas) that were the building blocks of the self. This theory was very similar to the early theories of the atom in Western science (the belief that material objects were composed of small indivisible particles).

Nagarjuna's great contribution to Buddhist thought was that he rejected the existence of any type of permanently indivisible objects. He asserted that all phenomena were empty of inherent existence.[5]

Nagarjuna based his philosophy on the early teachings of the Buddha. For example, Nagarjuna's influential Verses on the Middle Way includes a reference to the earlier Kaccayanagotta Sutta:

'Everything exists': That is one extreme.
'Everything doesn't exist': That is a second extreme.
Avoiding these two extremes,
The Tathagata teaches the Dhamma via the middle...."[6]

Nagarjuna clarified the above statement to a more subtle degree than previous Buddhist philosophers. "He used the traditional concept of the ‘middle way’ in a sophisticated dialectical manner, and in so doing pushed the implications of certain of the early teachings to their logical conclusion."[5]

In Chan Buddhism the term middle way (aka doctrine of the middle) is also used to describe the realization of being free of the one-sidedness of perspective that takes the extremes of any polarity as objective reality.

In chapter ten of the Platform Sutra, Huineng gives instructions for the teaching of the Dharma. Huineng enumerates 36 basic oppositions of consciousness and explains how the path is free from both extremes: