From Encyclopedia of Buddhism
(Redirected from Mingyur Rinpoche)
Jump to: navigation, search 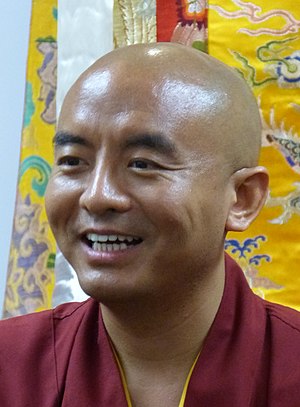 Yongey Mingyur Rinpoche (born 1975)[1] is a Tibetan teacher and master of the Karma Kagyu and Nyingma lineages of Tibetan Buddhism. He has authored two best-selling books and oversees the Tergar Meditation Community, a global network of Buddhist meditation centers.

Mingyur Rinpoche was born in Nepal in 1975. His brothers are Chokyi Nyima Rinpoche, Tsikey Chokling Rinpoche, and Tsoknyi Rinpoche and his nephews are Phakchok Rinpoche and Khyentse Yangsi Rinpoche. From the age of nine, his father, Tulku Urgyen Rinpoche, taught him meditation, passing on to him the most essential instructions of the Dzogchen and Mahamudra traditions.[1]

Rinpoche has overseen the Kathmandu Tergar Osel Ling Monastery, founded by his father, since 2010. He also opened a shedra (monastic college) at the monastery.[2]

In June 2011, Mingyur Rinpoche left his monastery in Bodhgaya to begin a period of extended retreat. Rinpoche left in the middle of the night, taking nothing with him, but leaving a farewell letter.[3]

He spent four years as a wandering yogi.[4]