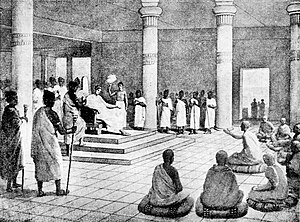 Nāgasena was a Sarvastivadan Buddhist sage born in Kashmir[1][2] and lived around 150 BCE. His answers to questions about Buddhism posed by Menander I (Pali: Milinda), the Indo-Greek king of northwestern India, are recorded in the Milinda Pañha and the Sanskrit Nāgasenabhiksusūtra.[3]

Milind-Pañña or Milindo-Pañño (-o = the) is a Pali treatise which means "Wisdom of (King) Milinda" -- pañña = wisdom, knowledge. It deals with the conversation that took place between the monk Nagasena and King Milinda in the form of questions and answers. Its author is undoubtedly the monk Nagasena, who wrote it originally in Pali language which is a derivative of Sanskrit and has close affinity with Kishtwari (sister-language of Kashmiri spoken predominantly in the district of kishtwar in jammu and Kashmir state) .[4]

There is almost universal agreement that a core text was later expanded by numerous other authors, following a question and answer pattern established in the early books. The version extant today is very long, and has signs of inconsistent authorship in the later volumes. There is no agreed-upon point at which Nagasena's authorship may be said to end (and the work of other hands begins), nor has this been perceived as an inherently important distinction by monastic scholars.

The text mentions that Nagasena learned the Tripiṭaka under the Greek Buddhist monk Dhammarakkhita near Pātaliputta (modern Patna). He also reached enlightenment and became an arhat under his guidance.

Nagasena is not known through other sources besides the Milinda Panha and this legend.

Nagasena is one of the Eighteen Arhats of Mahayana Buddhism. His traditional textile depiction shows him holding a khakkhara in his right hand and a vase in his left; an excellent example can be seen on one of the thangkas in the Cleveland Museum of Art collection. "This figure [conforms with the image of] the arhat Nagasena, shown in Jivarama's sketchbook of 1435"[5] who also holds a vase.

A similar depiction can be seen in the collection of Singapore's Asian Civilisations Museum (Qianlong era, 18C: tangka with silk appliqué.)[6]

More modern statues often show a bald, elderly monk scratching his ear with a stick to symbolize purification of the sense of hearing. An adherent of Buddhism should avoid listening to gossip and other nonsense so that they are always prepared to hear the truth.