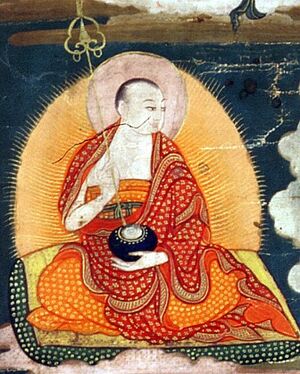 Nanda (T. dga' bo དགའ་བོ་; C. Nantuo) was the half-brother of the Gautama Buddha and one of his main disciples. He was foremost among the disciples in the practice of self control.[1]

Nanda was the son of Śuddhodana of the Shakya clan, and Mahapajapati, who was the younger sister of Māyā, the Buddha's mother.

After attaining enlightenment, the Buddha returned to his childhood home and taught the dharma to his family and friends, including Nanda. Nanda was engaged to be married to a beautiful woman, but on the day of his wedding, the Buddha requested Nanda to become a monk and join his sangha. Nanda reluctantly agreed to join the sangha, but after becoming a monk, he still yearned intensely for his former fiance.

Nanda replied that compared to these beautiful maidens, his former fiance looked like the scarred monkey.

The Buddha then told Nanda that if he practiced virtuously in this life, he could have one of these maidens as a consort in his next life. Upon hearing this, Nanda practiced diligently with the aim of having a beautiful consort in his next life. However, when the other monks learned of Nanda's desire, they ridiculed him for his base motivation. Eventually Nanda renounced all desire, and attained Arhatship.