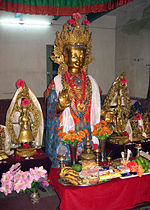 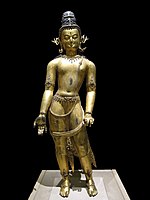 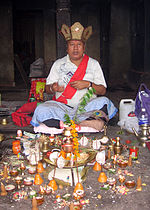 Newar Buddhism is the form of Vajrayana Buddhism practiced by the Newar people of the Kathmandu Valley, Nepal.[1][2] It has developed unique socio-religious elements, which include a non-monastic Buddhist society based on the Newar caste system and patrilineality. The ritual priests (guruju), vajracharya (who perform rituals for others) and shakya (who perform rituals mostly for their own families) form the non-celibate religious sangha while other Buddhist Newar castes like the Urāy act as patrons. Uray also patronise Tibetan Vajrayanin, Theravadin, and even Japanese clerics.[3]

Although there was a vibrant regional tradition of Buddhism in the Kathmandu Valley during the first millennium, the transformation into a distinctive cultural and linguistic form of Buddhism appears to have taken place in the fifteenth century, at about the same time that similar regional forms of Indic Buddhism such as those of Kashmir and Indonesia were on the wane. As a result, Newar Buddhism seems to preserve some aspects of Indian Buddhism that were not preserved in schools of Buddhism elsewhere.[citation needed]

Newar Buddhism is characterized by its extensive and detailed rituals, a rich artistic tradition of Buddhist monuments and artwork like the Chaitya (stupa), Baha and Bahi monastic courtyards, statues, Paubha scroll paintings and Mandala sand paintings, and by being a storehouse of ancient Sanskrit Buddhist texts, many of which are now only extant in Nepal.[4]

According to the authors of Rebuilding Buddhism: The Theravada Movement in Twentieth-Century Nepal: "Today traditional Newar Buddhism is unquestionably in retreat before Theravada Buddhism."[5] Chachā (Charyā) ritual song and dance and Gunlā Bājan music are other artistic traditions of Newar Buddhism.[6] Although Newar Buddhism was traditionally bound to the Kathmandu Valley and its environs, there is at least one new Newar Buddhist temple in Portland, Oregon.[7]

Seto Machindranath Jatra at the Temple of Annapurna

A number of major street celebrations are held periodically involving processions, displays of Buddha images and services in the three cities of the Kathmandu Valley and in other parts of Nepal.

Newar Buddhism is largely practiced within the community, however news about Newar Buddhist functions and festivals is reported in Nepali by Kathmandu based Bodhi TV.[8]