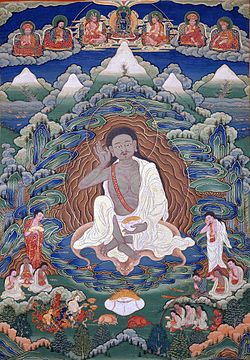 Milarepa, wearing the distinctive white shawl (zen) of a Ngagpa

In Tibetan Buddhism and Bon,[1] a Ngagpa (Tibetan: སྔགས་པ་, Wylie: sngags pa; Sanskrit mantrī) is a non-monastic practitioner of Dzogchen who has received a skra dbang, a hair empowerment, for example in the Dudjom Tersar lineage. This empowers one's hair as the home of the dakinis and therefore can never be cut. The term is specifically used to refer to lamas and practitioners (male or female[lower-alpha 1]) who are “tantric specialists”[lower-alpha 2] and may technically be applied to both married householder tantric priests (khyim pa sngags pa) and to those ordained monastics whose principal focus and specialization is vajrayana practice. However, in common parlance (and many western books on Tibetan Buddhism), “ngakpa” is often used only in reference to non monastic Vajrayana priests, especially those in the Nyingma and Bonpo traditions.

In Bhutan, and some other parts of the Himalayas, the term gomchen is the term most often used to refer to this type of Vajrayana priest,[3] with ngakpa being reserved only for the most accomplished adepts amongst them who have become renowned for their mantras being particularly efficacious.[citation needed]

Tibetan Buddhism contains two systems of ordination, the familiar monastic ordinations and the less well known Ngagpa or Tantric ordinations.[4] Ngagpa ordination is non-monastic and non-celibate, but not "lay." It entails its own extensive system of vows, distinct from the monastic vows.

Ngakpas often marry and have children. Some work in the world, though they are required to devote significant time to retreat and practice and in enacting rituals when requested by, or on behalf of, members of the community.

There are family lineages of Ngakpas, with the practice of a particular Yidam being passed through family lineages. However, a ngakpa may also be deemed as anyone thoroughly immersed and engaged in the practice of the teachings and under the guidance of a lineage-holder and who has taken the appropriate vows or samaya and had the associated empowerments and transmissions. Significant lineage transmission is through oral lore.

As scholar Sam van Schaik describes, "the lay tantric practitioner (sngags pa, Skt. māntrin) became a common figure in Tibet, and would remain so throughout the history of Tibetan Buddhism." [lower-alpha 3]

Kunga Gyaltsen, the father of the 2nd Dalai Lama, was a non-monastic ngakpa, a famous Nyingma tantric master.[8] His mother was Machik Kunga Pemo; they were a farming family. Their lineage transmission was by birth.[9]

The Ngagpa college of Labrang Monastery

Labrang Monastery, one of the major Gelug monasteries in Amdo, has a Ngagpa college (Wylie: sngags pa grwa tshang) located nearby the main monastery at Sakar village.