The Nyingma (Tib. རྙིང་མ་, Wyl. rnying ma) school is one of the four major schools of Tibetan Buddhism.

The Nyingma, or Ancient ones, are the followers of those original translations of the teachings of the Buddha into Tibetan which were carried out up until the time of the Indian translator Smrtijñanakirti in the late tenth century. They are known as the ‘Earlier Translation School‘, Ngagyur Nyingma (Wyl. snga 'gyur rnying ma), distinguishing them from the ‘New Schools’, Sarma, such as the Kadam, Kagyü, Sakya, and eventually Geluk, which followed the later translations made from the time of the great translator Rinchen Zangpo (958-1055) onwards.

The "Nyingma" school is founded on the first translations of Buddhist scriptures from Sanskrit into Old Tibetan in the eighth century. The Tibetan alphabet and grammar was created for this endeavour.

The Nyingma school comprises several distinct lineages that all trace their origins to the Indian master Padmasambhava. Traditionally, Nyingmapa practice was advanced orally among a loose network of lay practitioners. Monasteries with celibate monks and nuns, along with the practice of reincarnated spiritual leaders are later adaptations.[1]

Distinct features of the Nyingma school include the terma tradition and the practice of Dzogchen.

Statue of Padmasambhava, a central figure of the Nyingma tradition, Bhutan.

A Scholar, a Yogi, and a Dharma King

Traditionally, the Nyingma school identifies three main figures with the origins of the Nyingma tradition: Shantarakshita (a scholar), Padmasambhava (a great tantric yogi), and King Trisong Detsen (the Dharma king).

In the eighth century, while the great Buddhist traditions were flourishing in India, King Trisong Detsen invited the great Abbot Shantarakshita to establish Buddhism in Tibet. The King worked with Shantarakshita in establishing Buddhism, but they soon faced hindrances to their work. At Shantarakshita’s suggestion, the King of Tibet invited Padmasambhava to Tibet, requesting him to pacify the negative and obstructing forces. Through his compassion and wisdom, Padmasambhava overcame these obstacles, and genuine Buddhism was successfully transplanted in Tibet .

Together with the great bodhisattva, Abbot Shantarakshita, Padmasambhava built the renowned Samye monastery (in Southern Tibet), which became a principal center of learning, where most of the Sanskrit texts and literature from India were first translated into Tibetan. Under the guidance of Padmasambhava, Shantarakshita, and the Dharma King Trisong Detsen, the teachings of Buddha Shakyamuni, as well as the commentaries of the Indian masters of Nalanda University and other places were fully translated into Tibetan at Samye.[2] 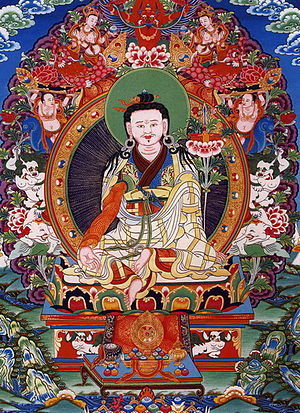 Longchen Rabjampa, Drimé Özer (Longchenpa, 1308-1364, possibly 1369) is a central thinker and poet in Nyingma thought and Tibetan Buddhist philosophy. He is mainly known for his systematized integration and exposition of the major textual cycles such as the Menngagde in his various writings, which by his time had become central texts in the Nyingma tradition.[3] His main writings include the Seven Treasuries (mdzod bdun), the "Trilogy of Natural Freedom" (rang grol skor gsum), the "Trilogy that Clears Darkness" ("mun sel skor gsum"), and the Trilogy of Natural Ease (ngal gso skor gsum).

Lochen Dharmaśrī (1654–1717) wrote important commentaries on the Guhyagarbha tantra and his brother Terdak Lingpa (1646–1714) was the founder of the Mindrolling Monastery in 1670, one of the six major Nyingma monasteries.[6]

A later seminal figure in the development of the Nyingma system was Jigme Lingpa (1730-1798) "the greatest treasure finder of the eighteenth century",[7] whose Longchen Nyingthig ("The Heart-essence of the Vast Expanse") is a systematization of the path which is one of the most widely used Nyingma Dzogchen teachings today.[8]

Rime and the rise of scholasticism 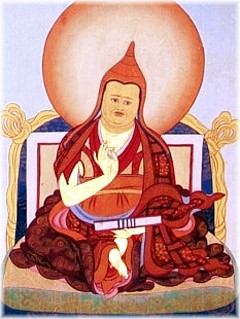 In 1848, the Nyingma monastic college of Dzogchen Shri Sengha (rdzogs chen srwi sengha), was founded in Kham by a charismatic teacher, Zhanphan Thaye (gzhan phan mtha' yas, 1800-), in association with the active participation of Do Kyentse (rndo mkhyen rtse). According to Georges Dreyfus, the Nyingma school had traditionally "relied on non-ordained tantric practitioners to transmit its teachings through authorized lineages."[9] The foundation of this monastic school was a major shift in the Nyingma tradition, and is seen as a response to the growth of the Gelug school's hegemony which was based on a well organized system of monastic scholasticism and education.[9] The sort of study and learning in this monastery was mostly based on exegetical commentary, a contrast to the more debate based Gelug education. In this way, the Nyingma school revilatized itself and presented itself as a legitimate rival to the Gelug school.[9]

The 19th century also saw the rise of the non-sectarian 'Rime' movement, led by Jamyang Khyentse Wangpo (1820-1892) and Jamgön Kongtrül (1813-1899) which sought to collect and print the teachings of the Sakya, Kagyu and Nyingma schools in response to the hegemonic influence of the Gelug school.[10]

Jamgon Ju Mipham Gyatso (“Mipham the Great”, 1846-1912) was born into an aristocratic family in 1846 in Kham, a province of eastern Tibet. Mipham was a student of Rime scholars like Kongtrül. Mipham composed authoritative works on both the Sutra and Vajrayana teachings as understood in the Nyingma tradition, writing extensively on Dzogchen and Madhyamaka. According to Karma Phuntsho, Mipham's work "completely revolutionised rNying ma pa scholasticism in the late nineteenth century, raising its status after many centuries as a comparative intellectual backwater, to arguably the most dynamic and expansive of philosophical traditions in all of Tibetan Buddhism, with an influence and impact far beyond the rNying ma pa themselves."[11]

Mipham's works have become the foundation of study for not only the Nyingma lineage, but the Kagyu lineage as well. They hold a central position in all Nyingma monasteries and monastic colleges.[12]

Following in the footsteps of Mipham, Khenpo Shenga was also an important figure in the revitalization of Nyingma monastic education by establishing the study of exoteric philosophy at Dzogchen Shri Sengha [9] through the use of classic Indian texts, which include the major works of Asanga, Nagarjuna and Aryadeva.[13] Khenpo Shenga composed commentaries on these key texts and scholastic textbooks. He focused on the study of these texts as a way to avoid sectarian disputes by appealing to classic Indian material.[13]

Dzogchen ("Great Perfection") is the central distinctive practice and view which is the focus of Nyingma and it is seen by this school as the supreme practice.[14] It is seen as the ultimate understanding of the nature of mind, which is known as rigpa. Dzogchen seeks to understand the nature of mind without the subtle body practices and visualizations of other tantric forms, and Dzogchen tantras state that visualization practices are inferior to Dzogchen, which directly works with the nature of the mind itself.[15] A main feature of Dzogchen is the practice of “cutting through” (khregs chod) the everyday mind and its obscurations to reach the primordial nature of mind or rigpa, which is essential purity (ka dag) and spontaneity (lhun grub), and is associated with emptiness (shunyata). The second form of Dzogchen practice is referred to as “direct approach” (thod rgal) and involves making an effort at recognizing spontaneity through the use of visions or appearances. This is said to be associated with skillful means (upaya)[16]

Like in other schools of Tibetan Buddhism, Nyingma teachers various forms of ngöndro, or preliminary practices which help prepare the mind for later meditations. These include the cultivation of "bodhicitta", the "four thoughts that turn the mind", and Vajrasattva purification practice.

Other forms of practice like Lojong and subtle body practices such as Trul khor are also taught in Nyingma.

In the early translation school of the Nyingma, a system of nine yanas is taught. Three of these--the paths of the sravaka, pratyekabuddha and bodhisattva--constitute the sutra tradition, while the tantric tradition consists of six levels--the three outer tantras and the three inner tantras. The tradition of Dzogchen, or Atiyoga, is considered to be the pinnacle of these nine yanas.[19]

Just as it is impossible for a king to travel without the aid of his courtiers, in the same way the key points of all the yanas serve as steps and supports for the Dzogchen path.[20]

With the advent of the transmission of Sarma traditions into Tibet, various proponents of the new systems cast aspersions on the Indic origins of much of the Nyingma esoteric corpus. Indic origin was an important component of perceived legitimacy at the time. As a result, much of the Nyingma esoteric corpus was excluded from the Tengyur, a compilation of texts by Buton Rinchen Drub that became the established canon for the Sarma traditions. This means that while Nyingma accept the Tengyur scriptures they also include writings that other schools reject as not being authentic for having no Indic sources—though Sanskrit originals of some have been discovered in Nepal.[21]

Various editions of the Gyubum are extant, but one typical version is the thirty-six Tibetan-language folio volumes published by Dilgo Khyentse Rinpoche in New Delhi, 1974. It contains:

Dzogchen literature is usually divided into three categories, which more or less reflect the historical development of Dzogchen:

According to the Nyingma-tradition, Padmasambhava and his main disciples hid hundreds of scriptures, ritual objects and relics in secret places to protect Buddhism during the time of decline, under King Langdarma, and for when the dharma would need revitalizing in the future. These termas were later rediscovered. The Rinchen Terdzod (Tibetan: རིན་ཆེན་གཏེར་མཛོད།, Wylie: rin chen gter mdzod) is the most important collection of terma treasure to Nyingmapas today. This collection[25] is the assemblage of thousands of the most important terma texts from all across Tibet made by Jamgon Kongtrul Lodro Thaye, at the behest of Jamyang Khyentse Wangpo in the nineteenth century.