The Karmapa is head of the Karma Kagyu school, one of the four main schools of Tibetan Buddhism.

Born in Lhatok Township, Chamdo County, Tibet Autonomous Region, China, to primarily nomadic parents,[1] Ogyen Trinley Dorje is said to have identified himself to family members as the Karmapa early in childhood. (The identification of the 17th Karmapa is disputed. See Karmapa controversy.) Known as Apo Gaga, he was seven years old before he was recognized by a search party headed by the Tai Situpa, following instructions Situpa claims were left to him by the previous Karmapa in a prophetic letter hidden in a locket. Ogyen Trinley Dorje was installed at Tsurphu Monastery (Wylie: Mtshur-phu), the traditional seat of the Karmapa in Tibet, recognized by both the 14th Dalai Lama and the official sanction of the State Council of the People's Republic of China, who declared him to be a "living Buddha", the first time the China's communist government has officially confirmed a tulku. Already a year later the Chinese announced during the UN-Human Rights Conference in Vienna, that they would train him in Tsurphu for his future task as successor of the Dalai Lama.[2]

At the age of 14, he escaped to India through Nepal,[3] arriving at the Tibetan exile quarters at McLeod Ganj on January 5, 2000. Ogyen Trinley Dorje had felt that he was unable to obtain in China the specialized instruction he needed to complete his studies and to realize his full spiritual authority. He resides at Gyuto Monastery in Sidhbari, near Dharamshala.

From May 15 – June 2, 2008, he made his first trip to the West, visiting several cities in the United States (notably New York City, Boulder, Colorado, and Seattle)[4] and was formally enthroned in the North American seat of the Karmapas at Karma Triyana Dharmachakra monastery in Woodstock, New York.[5] All across the country, he gave multiple teachings on compassion and the environment, gave the reading transmission for a new form of ngöndro, and bestowed several empowerments, including those of Avalokiteśvara and Padmasambhava. He also spoke about the special challenges of the rapid pace of modern society, and the virtues of the Internet as a tool for the study and practice of Buddhism.

In July 2008 he requested permission to visit monasteries in Lahaul and Spiti district in Himachal Pradesh and in Ladakh in Jammu and Kashmir. The Government of India initially refused to allow these visits without giving a reason. It was speculated that the reason might have been that these areas are close to the border with China and that the 2008 Summer Olympics were approaching even though the Karmapa had made it clear that he does not promote Tibetan independence and has no political stance on China.[6] India eventually allowed his tour, which began in Ladakh, followed by Lahaul and Spiti, including the famous Tabo Monastery.[7] 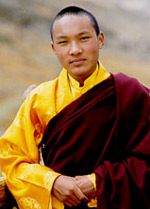 Requests to visit USA and Europe in 2010 were denied by the Indian government.

On 9 July 2011, Dorje arrived back in the United States for his second visit. From 09 – 17 July, he participated in the Kalachakra initiation bestowed by the 14th Dalai Lama in Washington, D.C., then traveled by train to his seat at Karma Triyana Dharmachakra and also visited both his center in New Jersey and Hunter College in New York City, returning to India on 4 August. During his visit, he taught extensively on compassion, gave Refuge, and bestowed the empowerments of both the Four-Armed and Thousand-Armed forms of Avalokiteśvara. He also granted an interview with Laurie Goodstein of The New York Times, which was published on 28 July 2011.[8] 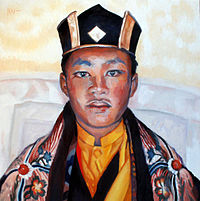 "Gyalwa Karmapa" (Ogyen Trinley Dorje), by painter Claude-Max Lochu, exhibition for the project of Temple for Peace in France, 2008

On January 3, 2007, Ogyen Trinley Dorje mandated a purely vegetarian diet in all his monasteries and centers and strongly urged vegetarianism among all his students, saying that generally, in his view, it was very important in the Mahayana not to eat meat and that, even in Vajrayana, it is preferable for students and practitioners not to eat meat.[9]

Commenting on the Buddhist tradition of life release, where animals destined for slaughter are bought, blessed and natively released, Orgyen Trinley Dorje indicated that the meaning of this concept was broad and that practitioners should use their intelligence to expand the tradition.[10] Similarly, when addressing the 2007 Kagyu Monlam Chenmo, he indicated that planting a single tree can be more beneficial than performing life release for many beings; recommending that monasteries should plant one to two thousand trees. In addition he urged monks to practise restraint when sponsors offer technology upgrades.[11]

At the second conference on environmental protection (3 to 8 October 2009, Gyuto Monastery), he stated that "For too long, people have behaved thoughtlessly and ignored the damage to the environment that they are creating and, if this continued there was a great danger that it would be too late to do anything."[13]

In recent years, Khoryug, a network of Tibetan Buddhist monasteries and centers that work on environmental protection in the Eastern Himalayas, was developed under the auspices of Ogyen Trinley Dorje as part of the World Wildlife Fund's Sacred Earth: Faiths for Conservation program.[15] And, in his April 2015 interview with Yale Environment 360, he said, "The environmental emergency that we face is not just a scientific issue, nor is it just a political issue, it is also a moral issue. And therefore all of us approaching this issue have to pick up our share of the responsibility to find and implement solutions. The scientific aspect of it, of course, is the supply of information — the creation of models and predictions and the introduction of techniques that we can use to remedy this. But our share of this responsibility is to take what scientists teach us to heart, so we actually transform our way of life into one that is sustainable.”[16]