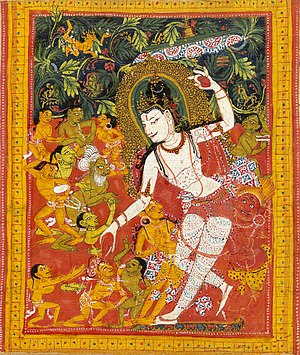 In the context of the path of the bodhisattva, the paramitas represent qualites that the bodhisattva strives to perfect in order to purify karma and kleshas and develop bodhicitta to the highest degree possible.

Note that this list is also mentioned by the Theravāda commentator Dhammapala, who says it is equivalent to the list of ten paramitas.[2]

When we say that paramita means "transcendent action," we mean it in the sense that actions or attitude are performed in a non-egocentric manner. "Transcendental" does not refer to some external reality, but rather to the way in which we conduct our lives and perceive the world - either in an egocentric or a non-egocentric way. The six paramitas are concerned with the effort to step out of the egocentric mentality.[3]

According to the perspective the Vajrayana path of Tibetan Buddhism, Mahayana practitioners can choose between two practice paths:

Teachings on pāramitās can be found within the texts of the Pali Canon (Jātaka, Apadāna, Buddhavaṃsa, Cariyāpiṭaka) and it's commentaries.[4][5] Note that the oldest parts of the Sutta Piṭaka (for example, Majjhima Nikāya, Digha Nikāya, Saṃyutta Nikāya and the Aṅguttara Nikāya) do not have any mention of the pāramitās as a category (though they are all mentioned individually).[6]

The path of the bodhisattva

Bhikkhu Bodhi (2005) suggests that, in the earliest Buddhist texts (which he identifies as the first four nikāyas), those seeking the extinction of suffering (nibbana) pursued the noble eightfold path. As time went on, a back-story was provided for the multi-life development of the Buddha; as a result, the ten perfections were identified as part of the path for the bodhisattva (Pāli: bodhisatta). Over subsequent centuries, the pāramīs were seen as being significant for aspirants to both Buddhahood and arahantship. Thus, Bodhi (2005) summarizes:

It should be noted that in established Theravāda tradition the pāramīs are not regarded as a discipline peculiar to candidates for Buddhahood alone but as practices which must be fulfilled by all aspirants to enlightenment and deliverance, whether as Buddhas, paccekabuddhas, or disciples. What distinguishes the supreme bodhisattva from aspirants in the other two vehicles is the degree to which the pāramīs must be cultivated and the length of time they must be pursued. But the qualities themselves are universal requisites for deliverance, which all must fulfill to at least a minimal degree to merit the fruits of the liberating path.[7]

While, technically, pāramī and pāramitā are both Pāli, the Pāli literature makes far greater reference to pāramī. Bikkhu Bodhi states:

"The word pāramī derives from parama, 'supreme,' and thus suggests the eminence of the qualities which must be fulfilled by a bodhisattva in the long course of his spiritual development. But the cognate pāramitā, the word preferred by the Mahāyāna texts and also used by Pāli writers, is sometimes explained as pāram + ita, 'gone to the beyond,' thereby indicating the transcendental direction of these qualities."[7]