Padmasambhava[note 1] (lit. "Lotus-Born"), also known as Guru Rinpoche, was an 8th-century Indian Buddhist master. Although there was a historical Padmasambhava, little is known of him apart from helping the construction of the first Buddhist monastery in Tibet at Samye, at the behest of Trisong Detsen,[1] and shortly thereafter leaving Tibet due to court intrigues.[2]

A number of legends have grown around Padmasambhava's life and deeds, and he is widely venerated as a 'second Buddha' across Tibet, Nepal, Bhutan, and the Himalayan states of India.[3][4]

In Tibetan Buddhism, he is a character of a genre of literature called terma,[2] an emanation of Amitābha that is said to appear to tertöns in visionary encounters and a focus of guru yoga practice, particularly in the Rimé schools. The Nyingma school considers Padmasambhava to be a founder of their tradition.[5]

One of the earliest sources for Padmasambhava as a historical figure is the Testament of Ba (dating to the 9th or 10th centuries), which records the founding of Samye Monastery under the reign of king Trisong Detsen (r. 755–797/804).[6] Other texts from Dunhuang show that Padmasambhava's tantric teachings were being taught in Tibet during the 10th century. In later texts, Padmasambhava's story became highly mythologized and integrated into Tantric ritual.[7]

Nyangrel Nyima Özer (1136-1204) was the principal architect of the Padmasambhava mythos according to Janet Gyatso.[8] Guru Chöwang (1212–1270) was the next major contributor to the mythos.[8]

In the eleventh and twelfth centuries there were several competing terma traditions surrounding Padmasambhava, Vimalamitra, Songtsän Gampo, and Vairotsana.[9] At the end of the 12th century, there was the "victory of the Padmasambhava cult,"[10] in which a much greater role is assigned to the role of Padmasambhava in the introduction of Buddhism to Tibet.[11]

According to tradition, Padmasambhava was incarnated as an eight-year-old child appearing in a lotus blossom floating in Lake Dhanakosha, in the kingdom of Oddiyana.[12] While some scholars locate this kingdom in the Swat Valley area of modern-day Pakistan, a case on literary, archaeological, and iconographical grounds can be made for placing it in the present-day state of Odisha in India.[13] It has now been established that Padmasambhava is the adopted son of King Indrabhuti of Sambhala kingdom, in Oddiyana, which is the present day Sambalpur. So it can be safely said that Padmasambhava belongs to modern-day Sambalpur.[14] Padmasambhava's special nature was recognized by the childless local king of Oḍḍiyāna and was chosen to take over the kingdom, but he left Oddiyana for northern parts of India.[15][16]

Tantra in India and Nepal

In Rewalsar, known as Tso Pema in Tibetan, he secretly taught tantric teachings to princess Mandarava, the local king's daughter. The king found out and tried to burn him, but it is believed that when the smoke cleared he just sat there, still alive and in meditation. Greatly astonished by this miracle, the king offered Padmasambhava both his kingdom and Mandarava.[17]

Padmasambhava left with Mandarava, and took to Maratika Cave[18] in Nepal to practice secret tantric consort rituals. They had a vision of buddha Amitāyus and achieved what is called the "phowa rainbow body,"[note 2] a very rare type of spiritual realization. [note 3] Both Padmasambhava and one of his consorts, Mandarava, are still believed to be alive and active in this rainbow body form by their followers. She and Padmasambhava's other main consort, Yeshe Tsogyal, who reputedly hid his numerous termas in Tibet for later discovery, reached Buddhahood. Many thangkas and paintings show Padmasambhava in between them, with Mandarava on his right and Yeshe Tsogyal on his left.[19]

According to Sam van Schaik, from the 12th century on a greater role was assigned to Padmasambhava in the introduction of tantric Buddhism into Tibet:

According to earlier histories, Padmasambhava had given some tantric teachings to Tibetans before being forced to leave due to the suspicions of the Tibetan court. But from the twelfth century an alternative story, itself a terma discovery, gave Padmasambhava a much greater role in the introduction of Buddhism to Tibet, and in particular credited him with travelling all over the country to convert the local spirits to Buddhism.[11]

According to this enlarged story, King Trisong Detsen, the 38th king of the Yarlung dynasty and the first Emperor of Tibet (742–797), invited the Nalanda University abbot Śāntarakṣita (Tibetan Shiwatso) to Tibet.[20] Śāntarakṣita started the building of Samye.[20] Demonical forces hindered the introduction of the Buddhist dharma, and Padmasambhava was invited to Tibet to subdue the demonic forces.[21] The demons were not annihilated, but were obliged to submit to the dharma.[22][note 4] This was in accordance with the tantric principle of not eliminating negative forces but redirecting them to fuel the journey toward spiritual awakening. According to tradition, Padmasambhava received the Emperor's wife, identified with the dakini Yeshe Tsogyal, as a consort.[24]

Statues of Padmasambhava, Buddha and Amitayus at Namdroling Monastery.

Padmasambhava introduced the people of Tibet to the practice of Tantric Buddhism.[22][25]

"Nyingma" literally means "ancient," and is often referred to as "Nga'gyur" "[note 6] or the "early translation school" because it is founded on the first translations of Buddhist scriptures from Sanskrit into Tibetan, in the eighth century.[note 7]

The group particularly believes in hidden terma treasures. Traditionally, Nyingmapa practice was advanced orally among a loose network of lay practitioners. Monasteries with celibate monks and nuns, along with the practice of reincarnated spiritual leaders are later adaptations,[26] though Padmasambhava is regarded as the founder of Samye Gompa, the first monastery in the country.[27] In modern times the Nyingma lineage has been centered in Kham in eastern Tibet.

Main articles: Bhutan, History of Bhutan, and Buddhism in Bhutan

Bhutan has many important pilgrimage places associated with Padmasambhava. The most famous is Paro Taktsang or "Tiger's Nest" monastery which is built on a sheer cliff wall about 500m above the floor of Paro valley. It was built around the Taktsang Senge Samdup (stag tshang seng ge bsam grub) cave where he is said to have meditated in the 8th Century. He flew there from Tibet on the back of Yeshe Tsogyal, whom he transformed into a flying tigress for the purpose of the trip.[citation needed] Later he travelled to Bumthang district to subdue a powerful deity offended by a local king. According to legend, Padmasambhava's body imprint can be found in the wall of a cave at nearby Kurje Lhakhang temple.[citation needed] 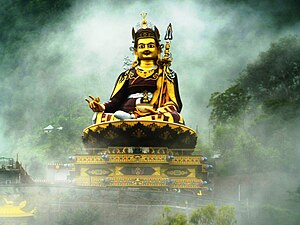 The khaṭvāńga is a particular divine attribute of Padmasambhava and intrinsic to his iconographic representation. It is a danda with three severed heads denoting the three kayas (the three bodies of a Buddha, the dharmakaya, sambhogakaya, and nirmanakaya), crowned by a trishula, and dressed with a sash of the Himalayan Rainbow or Five Pure Lights of the Mahabhuta. The iconography is utilized in various Tantric cycles by practitioners as symbols to hidden meanings in transmitted practices.

There are further iconographies and meanings in more advanced and secret stages.[citation needed]

A wrathful manifestation of Padmasambhava

Padmasambhava is said to have taken eight forms or manifestations (Tib. Guru Tsen Gye) representing different aspects of his being, such as wrath or pacification for example. According to Rigpa Shedra the eight principal forms were assumed by Guru Rinpoche at different points in his life. The Eight Manifestations of Padmasambhava belong to the tradition of the Revealed Treasures (Tib.: ter ma).[32]

His Pureland Paradise is Zangdok Palri (the Copper-Coloured Mountain).[34]

Teachings and practices ascribed to Padmasambhava

The Vajra Guru Mantra in Lanydza and Tibetan script.

The Vajra Guru (Padmasambhava) mantra Om Ah Hum Vajra Guru Padma Siddhi Hum is favoured and held in esteem by sadhakas. Like most Sanskritic mantras in Tibet, the Tibetan pronunciation demonstrates dialectic variation and is generally Om Ah Hung Benza Guru Pema Siddhi Hung. In the Vajrayana traditions, particularly of the Nyingmapa, it is held to be a powerful mantra engendering communion with the Three Vajras of Padmasambhava's mindstream and by his grace, all enlightened beings.[35] In response to Yeshe Tsogyal's request, the Great Master himself explained the meaning of the mantra although there are larger secret meanings too.[36] The 14th century tertön Karma Lingpa has a famous commentary on the mantra.[37]

The Seven Line Prayer to Padmasambhava

The Seven Line Prayer to Padmasambhava (Guru Rinpoche) is a famous prayer that is recited by many Tibetans daily and is said to contain the most sacred and important teachings of Dzogchen.

Jamgon Ju Mipham Gyatso composed a famous commentary to the Seven Line Prayer called White Lotus. It explains the meanings, which are embedded in many levels and intended to catalyze a process of realization. These hidden teachings are described as ripening and deepening, in time, with study and with contemplation.[38] Tulku Thondup says:

Enshrining the most sacred prayer to Guru Padmasambhava, White Lotus elucidates its five layers of meaning as revealed by the eminent scholar Ju Mipham. This commentary now makes this treasure, which has been kept secret among the great masters of Tibet for generations, available as a source of blessings and learning for all.

There is also a shorter commentary, freely available, by Tulku Thondup himself.[39] There are many other teachings and Termas and widely practiced tantric cycles incorporating the text as well as brief ones such as Terma Revelation of Guru Chöwang.[40]

Padmasambhava also hid a number of religious treasures (termas) in lakes, caves, fields and forests of the Himalayan region to be found and interpreted by future tertöns or spiritual treasure-finders.[41] According to Tibetan tradition, the Bardo Thodol (commonly referred to as the Tibetan Book of the Dead) was among these hidden treasures, subsequently discovered by a Tibetan terton, Karma Lingpa.

Tantric cycles related to Padmasambhava are not just practiced by the Nyingma, they even gave rise to a new offshoot of Bon which emerged in the 14th century called the New Bön. Prominent figures of the Sarma (new translation) schools such as the Karmapas and Sakya lineage heads have practiced these cycles and taught them. Some of the greatest tertons revealing teachings related to Padmasambhava have been from the Kagyu or Sakya lineages. The hidden lake temple of the Dalai Lamas behind the Potala called Lukhang is dedicated to Dzogchen teachings and has murals depicting the eight manifestations of Padmasambhava.[42] Padmasambhava established Vajrayana Buddhism and the highest forms of Dzogchen (Mengagde) in Tibet and transformed the entire nation.

Many of those who gathered around Padmasambhava became advanced tantric practitioners as well as helping to found and propagate the Nyingma tradition. The most prominent of these include Padmasambhava's five main female consorts, also known as dakinis and his twenty five main disciples. 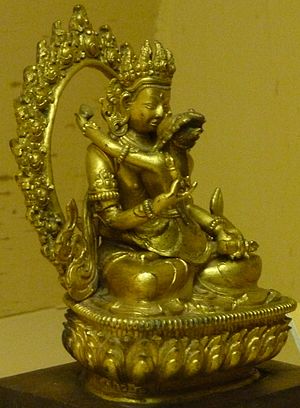 Padmasambhava in yab-yum form with his Shakti

Padmasambhava had five main female tantric companions, beginning in India before his time in Tibet and then in Tibet as well. When seen from an outer, or perhaps even historical or mythological perspective, these five women from across South Asia were known as the Five Consorts. That the women come from very different geographic regions is understood as mandala, a support for Padmasambhava in spreading the dharma throughout the region.

Yet, when understood from a more inner tantric perspective, these same women are understood not as ordinary women but as dakinis; from this point of view, they are known as the "Five Wisdom Dakinis" (Wylie: Ye-shes mKha-'gro lnga). Each of these consorts is believed to be an emanation of the tantric yidam, Vajravārāhī.[43] As one author writes of these relationships:

In summary, the five consorts/wisdom dakinis were:

While there are very few sources on the lives of Kalasiddhi, Sakya Devi, and Tashi Kyedren, there are extant biographies of both Yeshe Tsogyal and Mandarava that have been translated into English and other western languages.

The 'Twenty-five Main Disciples' of Padmasambhava 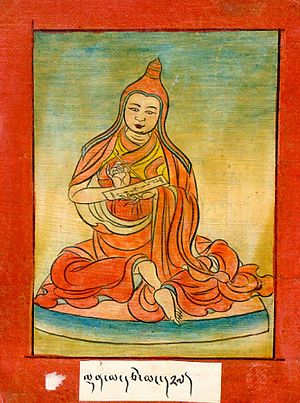 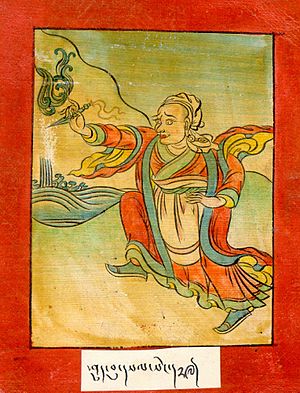