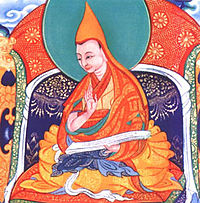 The Panchen Lama (Tibetan: པན་ཆེན་བླ་མ, Wylie: pan chen bla ma) is a tulku of the Gelug school of Tibetan Buddhism. Panchen Lama is one of the most important figures in the Gelug tradition, with its spiritual authority second only to Dalai Lama.[1] "Panchen" is an abbreviation of "Pandita" and "Chenpo", meaning "Great scholar".

The lineage of Panchen Lamas began with Lobsang Chökyi Gyaltsen, tutor of the 5th Dalai Lama, who received the title "Panchen Bogd" from Altan Khan and the Dalai Lama in 1645.[2] "Bogd" is Mongolian, meaning "holy".[3] Khedrup Gelek Pelzang, Sönam Choklang and Ensapa Lobsang Döndrup were subsequently recognized as the first to third Panchen Lamas posthumously.

Traditionally, Panchen Lama was the head of Tashilhunpo Monastery, and held religious and secular power over the Tsang region centered in Shigatse, independent of the Ganden Podrang authority led by Dalai Lama.[4][5] However, Dalai and Panchen Lamas are closely connected, and Panchen Lama is part of the process by which each new Dalai Lama is chosen.[6]

The identity of the current, 11th Panchen Lama is controversial. Under Chinese official support, Chökyi Gyalpo currently acts as the 11th Panchen Lama in Tibet. However, he has been rejected abroad. The Chinese government has been accused of kidnapping the Panchen Lama recognized by the Tibetan Government in Exile, Gedhun Choekyi Nyima.[7][8]

The successive Panchen Lamas form a tulku reincarnation lineage which are said to be the incarnations of Amitābha. The title, meaning "Great Scholar", is a Tibetan contraction of the Sanskrit paṇḍita (scholar) and the Tibetan chenpo (great). The Panchen Lama traditionally lived in Tashilhunpo Monastery in Shigatse. From the name of this monastery, the Europeans referred to the Panchen Lama as the Tashi-Lama (or spelled Tesho-Lama or Teshu-Lama).[9][10][11][12][13]

Other titles of Panchen Lama include "Panchen Bogd", the original title given by Altan Khan at the creation of the lineage. "Bogd" (Mongolian: ᠪᠣᠭᠳᠠ богд) is Mongolian, meaning "holy, saint".[2] In 1713, 5th Panchen Lama Lobsang Yeshe received the title "Panchen Erdeni" from Kangxi Emperor of Qing Empire, which is inherited by successive Panchen Lamas since then. "Erdeni", or "Erdini",[14] (Manchu: ᡝᡵᡩᡝᠨᡳ erdeni) is Manchu, meaning "treasure".[15][16]

Lobsang Chökyi Gyaltsen (1570–1662), was the first Panchen Lama to be accorded this title during his lifetime. He was the tutor and a close ally of the 5th Dalai Lama,[17]

"The Great Fifth", as he is known, pronounced the Panchen to be 'an incarnation of Dhayani Buddha Amitābha.'[18][19]

When Lobsang Chökyi Gyaltsen died in 1662, the 5th Dalai Lama commenced the tradition of searching for his next incarnation.[21] He also reserved the traditional title of Panchen which had previously been a courtesy title for all exceptionally learned lamas - exclusively for his successors. Khedrub Je, Sönam Choklang and Ensapa Lobsang Döndrup were posthumously decided by the 5th Dalai Lama to have been a previous incarnation of Lobsang Chökyi Gyaltsen, 4th Panchen Lama (1570–1662). Traditionally, there were considered to be four Indian and three Tibetan incarnations before Khedrup, starting with Subhuti, one of the original disciples of Gautama Buddha. Gö Lotsawa is considered to be the first Tibetan incarnation of Amitabha in this line.[22][23]

The recognition of Panchen Lamas has always been a matter involving the Dalai Lama.[24][25] Choekyi Gyaltsen, 10th Panchen Lama, himself declared, as cited by an official Chinese review that "according to Tibetan tradition, the confirmation of either the Dalai or Panchen must be mutually recognized."[26] The involvement of China in this affair is seen by some as a political ploy to try to gain control over the recognition of the next Dalai Lama (see below), and to strengthen their hold over the future of Tibet and its governance. China claims however, that their involvement does not break with tradition in that the final decision about the recognition of both the Dalai Lama and the Panchen Lama traditionally rested in the hands of the Chinese emperor. For instance, after 1792, the Golden Urn was thought to have been used in selecting the 10th, 11th and 12th Dalai Lamas;[27] but the 14th Dalai Lama, Tenzin Gyatso, has more recently claimed that this was only really used in selection of the 11th, and that in the other cases it was only used to humour the Chinese to confirm a selection that had already been made by traditional methods.[28]

In 1924, the thirteenth Dalai Lama prohibited the 9th Panchen Lama's followers from holding any office in the Central Tibetan government and imprisoned them in Lhasa, prompting the Panchen Lama to flee to Inner Mongolia, China.[29][30] The Dalai Lama was attempting to collect revenue from the Panchen Lama's estate to cover Tibet's military expenses, and to reduce the power of the Panchen Lama.[31] In China, the ninth Panchen Lama worked on plans to develop Tibet.[32] He also held a position in the Mongolian and Tibetan Affairs Commission, and was considered extremely "pro Chinese".[33][34][35] There, he adopted the ideas of Sun Yatsen through revolutionary Pandatsang Rapga of the Tibet Improvement Party.[36][37] 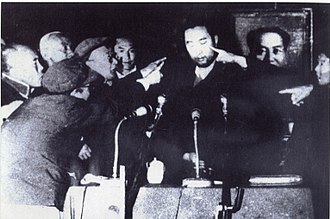 10th Panchen Lama during the "struggle session" (thamzing in Tibetan) 1964, before imprisonment by Communist Chinese

August 1987, The 10th Panchen Lama was visiting Tibet, thousands of Tibetans walked for days to line up and receive a blessing in this rare photo taken 2 years before his death.

When the Ninth Panchen Lama died in 1937, two simultaneous searches for the tenth Panchen Lama produced two competing candidates, with the Dalai Lama's officials selecting a boy from Xikang and the Panchen Lama's officials picking Gonpo Tseten.[38] The Republic of China government, then embroiled in the Chinese Civil War, declared its support for Tseten on 3 June 1949.[39] Chinese Nationalist governor Ma Bufang allowed Kumbum Monastery to be totally self-governed by Gyaltsen.[40] The Dalai Lama refused to recognize Tseten, now called Gyaltsen.[41]

The 10th Panchen Lama sought revenge on the Dalai Lama by leading an army against him, and requested aid from Ma Bufang in September 1949.[42] However, the Chinese Nationalist government, facing defeat from the communists, requested the Panchen Lama's help instead, formulating a plan where 3 Khampa divisions would be led by him as a broad anti-Communist base in Southwest China,[38][43] but the Panchen Lama decided to defect to the Communists instead. The Panchen Lama, unlike the Dalai Lama, sought to exert control in decision making.[44][45] 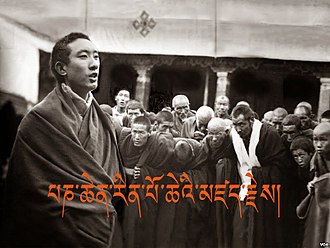 The Panchen Lama initially supported the Communist reform policies for Tibet.[41] Radio Beijing broadcast the religious leader's call for Tibet to be "liberated" into the PRC, which created pressure on the Lhasa government to negotiate with the People's Republic.[38] In April, 1959 the 10th Panchen Lama sent a telegram to Beijing expressing his support for suppressing the 1959 rebellion. “He also called on Tibetans to support the Chinese government.”[46]

However in 1962, he wrote the 70,000 Character Petition detailing abuses of power in Tibet and discussed it with Premier Zhou Enlai.[47] However, in 1964, he was imprisoned.[48] In October 1977, he was released but held under house arrest in 1982. In 1979, he married a Han Chinese woman and in 1983 they had a daughter.[49] In 1989, the 10th Panchen Lama died suddenly in Shigatse at the age of 51 shortly after giving a speech criticizing the excesses of the Cultural Revolution in Tibet but however praising the reform and opening up of the 1980s.[50] His daughter, now a young woman, is Yabshi Pan Rinzinwangmo, better known as "Renji".[51] 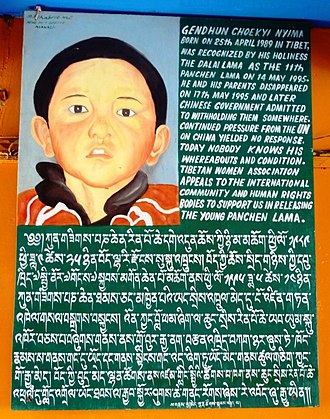 Sign referring to the disappearance of the 11th Panchen Lama chosen & recognized by His Holiness the 14th Dalai Lama of Tibet, Gedhun Choekyi Nyima in Manali, Himachal Pradesh, India

The Dalai Lama named Gedhun Choekyi Nyima as the 11th incarnation of the Panchen Lama on 14 May 1995,[52][53][54][55] but the search committee ignored the Dalai Lama's 14 May announcement and instead chose from a list of finalists which excluded Gedhun Choekyi Nyima. In selecting a name, lottery numbers were drawn from the Golden Urn.[56] Chinese authorities announced Gyancain Norbu as the search committee's choice on 11 November 1995.[57] It has been claimed that Gedhun had been taken into protective custody from those that would spirit him into exile and is now "in captivity against the wishes of the Tibetan people", whereas the Chinese government states that he is living a "normal private life".[58] Tibetans and human rights groups continue to campaign for his release.[59]

Relation to the Dalai Lama lineage

Monastic figures had historically held important roles in the social makeup of Tibet, and though these roles have diminished since 1959, many Tibetans continue to regard the Panchen Lama as a significant political, as well as spiritual figure due to the role he traditionally plays in selecting the next Dalai Lama. The political significance of the role is also utilised by the Chinese state.[63] Tibetan support groups such as London-based Free Tibet have argued that the Chinese government seeks to install its own choice of Dalai Lama when Tenzin Gyatso, the current Dalai Lama, dies and that for this reason the Dalai Lama's choice of Panchen Lama, Gedhun Choekyi Nyima went missing at the age of six, to be replaced by the Chinese state's choice, Gyaincain Norbu. It is suggested that the Chinese government may give the title of Dalai Lama to the son of a loyal ethnic Tibetan Communist party member and it will pressure Western governments to recognize its boy, and not the boy chosen by Lamas in India, as the head of Tibetan Buddhism.[64]