Pre-sectarian Buddhism,[1] also called early Buddhism,[2][3] the earliest Buddhism,[4][5] and original Buddhism,[6] is the Buddhism that existed before the various subsects of Buddhism came into being.[web 1]

Some of the contents and teachings of this pre-sectarian Buddhism may be deduced from the earliest Buddhist texts, which by themselves are already sectarian.[quote 1][quote 2][note 1]

Various terms are being used to refer to the earliest period of Buddhism:

Some Japanese scholars refer to the subsequent period of the early Buddhist schools as sectarian Buddhism.[2][3]

Pre-sectarian Buddhism may refer to the earliest Buddhism, the ideas and practices of Gautama Buddha himself. It may also refer to early Buddhism as existing until about one hundred years after the parinirvana of the Buddha[9] until the first documented split in the sangha.[9]

Contrary to the claim of doctrinal stability, early Buddhism was a dynamic movement.[10] Pre-sectarian Buddhism may have included or incorporated other Śramaṇic schools of thought,[11][note 3] as well as Vedic and Jain ideas and practices.[12][13][14][15]

The first documented split occurred, according to most scholars, between the second Buddhist council and the third Buddhist council.[16] The first post-schismatic groups are often stated to be the Sthavira nikāya and the Mahāsāṃghika.[note 4] Eventually, eighteen different schools came into existence.[17] The later Mahayana schools may have preserved ideas which were abandoned by the "orthodox" Theravada,[18] such as the Three Bodies doctrine, the idea of consciousness (vijñāna) as a continuum, and devotional elements such as the worship of saints.[8][19][note 5]

Earliest Buddhism and the Śramaṇa movement 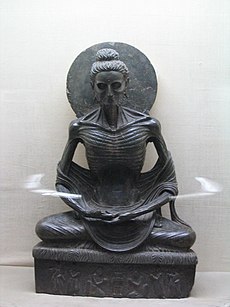 Pre-sectarian Buddhism was originally one of the śramaṇic movements.[20][21] The time of the Buddha was a time of disruption in Indian society, and saw the growth of the śramaṇas, wandering philosophers that had rejected the authority of Vedas and Brahmanic priesthood,[22] intent on escaping saṃsāra[20][23] through various means, which involved the study of natural laws, ascetic practices, and ethical behavior.[22]

The śramaṇas gave rise to different religious and philosophical schools, among which pre-sectarian Buddhism itself,[24][25] Yoga,[26] Jainism, Ājīvika, Ajñana and Cārvāka were the most important, and also to popular concepts in all major Indian religions such as saṃsāra (endless cycle of birth and death) and moksha (liberation from that cycle).[27][note 6] Nevertheless, despite the success that these wandering philosophers and ascetics had obtained by spreading ideas and concepts that would soon be accepted by all religions of India, the orthodox schools of Hindu philosophy (āstika) opposed to śramaṇic schools of thought and refuted their doctrines as "heterodox" (nāstika), because they refused to accept the epistemic authority of Vedas, denied the existence of the soul and/or the existence of Ishvara ("Supreme God").

The ideas of saṃsāra, karma and rebirth show a development of thought in Indian religions: from the idea of single existence, at the end of which one was judged and punished and rewarded for one's deeds, or karma; to multiple existences with reward or punishment in an endless series of existences; and then attempts to gain release from this endless series.[28] This release was the central aim of the Śramaṇa movement.[20] Vedic rituals, which aimed at entrance into heaven, may have played a role in this development: the realisation that those rituals did not lead to an everlasting liberation led to the search for other means.[20]

Contents and teachings of earliest Buddhism

According to Schmithausen, three positions held by scholars of Buddhism can be distinguished regarding the possibility to extract the earliest Buddhism:[29]

One method to obtain information on the oldest core of Buddhism is to compare the oldest extant versions of the Theravadin Pāli Canon, the surviving portions of the scriptures of Sarvastivada, Mulasarvastivada, Mahīśāsaka, Dharmaguptaka and other schools,[37][6] and the Chinese āgamas and other surviving portions of other early canons.[note 10][note 11] Early Mahayana texts which contain nearly identical material to that of the Pali Canon such as the Salistamba Sutra are also further evidence.[38]

The oldest recorded teachings are the texts of the four main nikayas of the Sutta Pitaka,[note 12] together with the main body of monastic rules, the Vinaya Pitaka.[citation needed] Scholars have also claimed that there is a core within this core, referring to some poems and phrases which seem to be the oldest parts of the Sutta Pitaka.[39][note 13]

The reliability of these sources, and the possibility to draw out a core of oldest teachings, is a matter of dispute.[12][40][41][33] According to Tillman Vetter, the comparison of the oldest extant texts "does not just simply lead to the oldest nucleus of the doctrine."[37] At best, it leads to

... a Sthavira canon dating from c. 270 B.C. when the missionary activities during Asoka's reign as well as dogmatic disputes had not yet created divisions within the Shtavira tradition.[37]

According to Vetter, inconsistencies remain, and other methods must be applied to resolve those inconsistencies.[37] Exemplary studies are the study on descriptions of "liberating insight" by Lambert Schmithausen,[42] the overview of early Buddhism by Tilmann Vetter,[40] the philological work on the four truths by K.R. Norman,[43] the textual studies by Richard Gombrich,[33] and the research on early meditation methods by Johannes Bronkhorst.[44]

A core problem in the study of early Buddhism is the relation between dhyana and insight.[40][12][33] The Buddhist tradition has incorporated two traditions regarding the use of dhyana (jhana).[12] There is a tradition that stresses attaining insight (bodhi, prajñā, kensho) as the means to awakening and liberation. But it has also incorporated the yogic tradition, as reflected in the use of jhana, which is rejected in other sutras as not achieving the final result of liberation.[40][45][33] The problem was famously voiced in 1936 by Louis de La Vallee Poussin, in his text Musila et Narada: Le Chemin de Nirvana.[46][note 14]

Schmithausen[note 15] notes that the mention of the four noble truths as constituting "liberating insight", which is attained after mastering the Rupa Jhanas, is a later addition to texts such as Majjhima Nikaya 36.[42][12][40] Schmithausen discerns three possible roads to liberation as described in the suttas,[42] to which Vetter adds the sole practice of dhyana itself, which he sees as the original "liberating practice":[47]

This problem has been elaborated by several well-known scholars, including Tilman Vetter,[40] Johannes Bronkhorst,[12] and Richard Gombrich.[33]

A separate stance has been taken by Stanislaw Schayer, a Polish scholar, who argued in the 1930s that the Nikayas preserve elements of an archaic form of Buddhism which is close to Brahmanical beliefs,[8][19][49][50] and survived in the Mahayana tradition.[51][52] Contrary to popular opinion, the Theravada and Mahayana traditions may be "divergent, but equally reliable records of a pre-canonical Buddhism which is now lost forever."[51] The Mahayana tradition may have preserved a very old, "pre-Canonical" tradition, which was largely, but not completely, left out of the Theravada-canon.[52]

Schayer searched in the early texts for ideas that contradict the dominant doctrinal positions of the early canon. According to Schayer, these ideas have

... been transmitted by a tradition old enough and considered to be authoritative by the compilers of the Canon. The last conclusion follows of itself: these texts representing ideas and doctrines contradictory to the generally admitted canonical viewpoint are survivals of older, precanonical Buddhism.[53][note 16]

They assume that wherever the Canon contains ideas which conflict with the orthodox theories of the Theravadins and Sarvastivadins, and wherever these ideas are taken up and developed by the Mahayana, we have to deal with a very old, "pre-Canonical" tradition, which was too venerable to be discarded by the compilers of the Canon.[52]

Accordin to Ray, Schayer has shown a second doctrinal position alongside that of the more dominant tradition, one likely to be of at least equivalent, if not of greater, antiquity.[55]

Schayer's methodology has been used by M. Falk.[55][note 17] Falk details the precanonical Buddhist conceptions of the cosmos, nirvana, the Buddha, the path, and the saint. According to Falk, in the precanonical tradition, there is a threefold division of reality:[55]

According to Falk, this scheme is reflected in the precanonical conception of the path to liberation.[57] The nirvanic element, as an "essence" or pure consciousness, is immanent within samsara. The three bodies are concentric realities, which are stripped away or abandoned, leaving only the nirodhakaya of the liberated person.[57] Wynne notes that this pure consciousness was the central element in precanonical Buddhism:

Schayer referred to passages in which "consciousness" (vinnana) seems to be the ultimate reality or substratum (e.g. A I.10) 14 as well as the Saddhatu Sutra, which is not found in any canonical source but is cited in other Buddhist texts — it states that the personality (pudgala) consists of the six elements (dhatu) of earth, water, fire, wind, space and consciousness; Schayer noted that it related to other ancient Indian ideas. Keith’s argument is also based on the Saddhatu Sutra as well as "passages where we have explanations of Nirvana which echo the ideas of the Upanishads regarding the ultimate reality." He also refers to the doctrine of "a consciousness, originally pure, defiled by adventitious impurities."[58]

Conze mentions ideas like the "person" (pudgala), the assumption of an eternal "consciousness" in the saddhatusutra, the identification of the Absolute, of Nirvana, with an "invisible infinite consciousness, which shines everywhere" in Dighanikdya XI 85, and "traces of a belief in consciousness as the nonimpermanent centre of the personality which constitutes an absolute element in this contingent world."[52]

According to Lindtner, in precanonical Buddhism Nirvana is

... a place one can actually go to. It is called nirvanadhatu, has no border-signs (animitta), is localized somewhere beyond the other six dhatus (beginning with earth and ending with vijñana) but is closest to akasa and vijñana. One cannot visualize it, it is anidarsana, but it provides one with firm ground under one’s feet, it is dhruva; once there one will not slip back, it is acyutapada. As opposed to this world, it is a pleasant place to be in, it is sukha, things work well.[8][note 19]

According to Lindtner, Canonical Buddhism was a reaction to this view, but also against the absolutist tendencies in Jainism and the Upanisads. Nirvana came to be seen as a state of mind, instead of a concrete place.[8]

Elements of this precanonical Buddhism may have survived the canonisation, and its subsequent filtering out of ideas, and re-appeared in Mahayana Buddhism.[8][49] According to Lindtner, the existence of multiple, and contradicting ideas, is also reflected in the works of Nagarjuna, who tried to harmonize these different ideas. According to Lindtner, this lead him to taking a "paradoxical" stance, for instance regarding nirvana, rejecting any positive description.[8]

According to Conze, Schayer's approach and results are "merely a tentative hypothesis".[59] Conze notes that it is also possible that these ideas later entered Buddhism, as a concession to "popular demand, just as the lower goal of birth in heaven (svarga) was admitted side by side with Nirvana."[59] According to Conze, the real issue is:

Did Buddhism originate among an elite of intellectuals, of philosophical ascetics, and then become a popular religion only at the time of Asoka? Or was it, even from the earliest times onwards, a popular religion based on the cult of the Bhagavan, of the Lord Buddha? And if so, was this religious side a part of its very essence, or just as propagandistic concession to laymen?[59]

Cite error: <ref> tag with name "VajiraStory" defined in <references> is not used in prior text.