Preta (Sanskrit: प्रेत) is the Sanskrit name for a type of supernatural being described in Hinduism, Buddhism, Taoism and Chinese and Vietnamese folk religion as undergoing suffering greater than that of humans, particularly an extreme level of hunger and thirst.[1] They have their origins in Indian religions and have been adopted into East Asian religions via the spread of Buddhism. Preta is often translated into English as "hungry ghost" from the Chinese adaptation. In early sources such as the Petavatthu, they are much more varied. The descriptions below apply mainly in this narrower context.

Pretas are believed to have been false, corrupted, compulsive, deceitful, jealous or greedy people in a previous life. As a result of their karma, they are afflicted with an insatiable hunger for a particular substance or object. Traditionally, this is something repugnant or humiliating, such as cadavers or feces, though in more recent stories, it can be anything, however bizarre.[2]

The Sanskrit term preta means "departed, deceased, a dead person", from pra-ita, literally "gone forth, departed". In Classical Sanskrit, the term refers to the spirit of any dead person, but especially before the obsequial rites are performed, but also more narrowly to a ghost or evil being.[3] The Sanskrit term was taken up in Buddhism to describe one of six possible states of rebirth. The Chinese term egui (餓鬼), literally "starving ghost", is thus not a literal translation of the Sanskrit term.

Pretas are invisible to the human eye, but some believe they can be discerned by humans in certain mental states. They are described as human-like, but with sunken, mummified skin, narrow limbs, enormously distended bellies and long, thin necks. This appearance is a metaphor for their mental situation: they have enormous appetites, signified by their gigantic bellies, but a very limited ability to satisfy those appetites, symbolized by their slender necks.

Pretas are often depicted in Japanese art (particularly that from the Heian period) as emaciated human beings with bulging stomachs and inhumanly small mouths and throats. They are frequently shown licking up spilled water in temples or accompanied by demons representing their personal agony. Otherwise they may be shown as balls of smoke or fire.

Pretas dwell in the waste and desert places of the earth, and vary in situation according to their past karma. Some of them can eat a little, but find it very difficult to find food or drink. Others can find food and drink, but find it very difficult to swallow. Others find that the food they eat seems to burst into flames as they swallow it. Others see something edible or drinkable and desire it but it withers or dries up before their eyes. As a result, they are always hungry.

In addition to hunger, pretas suffer from immoderate heat and cold; they find that even the moon scorches them in the summer, while the sun freezes them in the winter.

The sufferings of the pretas often resemble those of the dwellers in hell, and the two types of being are easily confused. The simplest distinction is that beings in hell are confined to their subterranean world, while pretas are free to move about.

Relations between pretas and humans 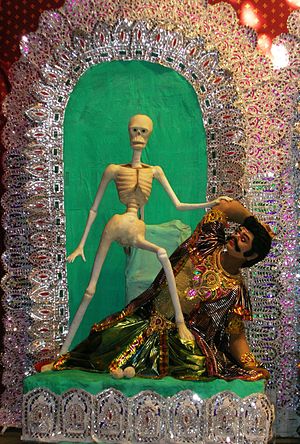 A preta depicted during Kali Puja.

Pretas are generally seen as little more than nuisances to mortals unless their longing is directed toward something vital, such as blood. However, in some traditions, pretas try to prevent others from satisfying their own desires by means of magic, illusions, or disguises. They can also turn invisible or change their faces to frighten mortals.

Generally, however, pretas are seen as beings to be pitied. Thus, in some Buddhist monasteries, monks leave offerings of food, money, or flowers to them before meals. 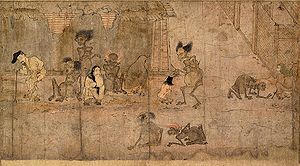 Since 657, some Japanese Buddhists have observed a special day in mid-August to remember the gaki. Through such offerings and remembrances (segaki), it is believed that the hungry ghosts may be released from their torment.

In the modern Japanese language, the word gaki is often used to mean spoiled child, or brat. In a game of tag, the person who is "it" may be known as the gaki.

In Hinduism Pretas are very real beings. They are a form, a body consisting only of air and Akasha (Sky or Dark matter or space), two of the five elements which constitutes a body on Earth or any other planet - i.e. Air, Water, Dark Matter (Space), Fire and Earth. There are other forms as per the ‘Karma’ or ‘actions’ of previous lives where a soul takes birth in bodies resembling human forms or forms of the main intelligent entity in a planet, but with a unique difference that is absence of one to three elements. In Hinduism an Atma or Soul is bound to take rebirth after death in a body composed of five or more elements. A soul in transient mode is pure and its existence is comparable to that of a Deva (divine being) but in the last form of physical birth. The elements except Akasha or Sky or Dark matter as defined is the common constituent throughout the Universe and the remaining four are common to the properties of the planets or stars or places of birth. This is the reason that Pretas cannot eat or drink as the rest of the three elements (Earth, Fire, and Water) are missing hence no digestion or physical intake is possible for them.[citation needed]

In Thailand, pret (Thai: เปรต) are hungry ghosts of the Buddhist tradition that have become part of the Thai folklore, but are described as being abnormally tall.[4]