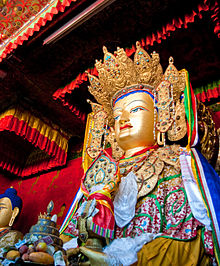 Princess Wencheng (Tibetan: Mung-chang Kungco; Chinese: 文成公主; pinyin: Wénchéng Gōngzhǔ; Wade–Giles: Wen-ch'eng Kung-chu; 628–680/2[3]), surnamed Li, was a member of a minor branch of the royal clan of the Chinese Tang dynasty (possibly the daughter of Li Daozong, the Prince of Jiangxia). In 641,[3] she was granted by Emperor Taizong of Tang to King Songtsen Gampo of Tibet for marriage. She is popularly known in Tibet as Gyasa, or "Chinese wife".[4]

It is hard to disentangle myth and propaganda from history in the accounts of her life. Chinese sources since the Tang dynasty credit her with introducing Chinese culture to Tibet,[5] whereas Tibetan sources say that King Songtsen Gampo introduced Buddhism to Tibet and chose her, along with Songtsen Gampo's Nepalese wife, Bhrikuti, to bring Buddhist wives to Tibet along with the two most venerable statues of the Buddha[6][7]. She brought the Jowo statue Traditional Tibetan histories consider both Wencheng and Bhrikuti as physical manifestations of the bodhisattva Tara, and Songtsen Gampo as a physical manifestation of Chenresizg[8] although the historical veracity of Bhrikuti is still debated among scholars.[3][9]

Chinese sources say she was granted in marriage as an involuntary actor of the emperor's heqin (marriage alliance) policy [10] to introduce Chinese culture to surrounding states. Tibetan sources say that King Songtsen Gampo sought her as a Buddhist princess and that the Chinese emperor gave her hand in marriage as a result of a threat of military force[5]. She is of special interest for her role in the introduction of Buddhism to the royal fammily of Tibet. Although parts of Tibet already were familiar with the buddhadharma, from central Asia, the Tibetan Kings took their religion from China.[1]

Prelude to the marriage

Chinese records mention receiving envoys and tributes in 634 from Songtsen Gampo wherein the king requested[11] to marry a Chinese princess and was refused. In 635/636 the Tibetan king's forces attacked and defeated the Tuyuhun, who lived around Lake Koko Nor in present-day Qinghai, along an important trade route into China. Songtsen Gampo attacked the Chinese frontier city of Songzhou (OTA l. 607) – Chinese sources say a Tang force defeated his army and he retreated and sent an apology to the Tang emperor, Taizong, who then agreed to marry a Chinese princess to the Tibetan king.[11]

Tibetan records say that Gampo, wishing to obtain a second wife from China, sent his ambassador to Emperor Taizong (627–650) of the Tang dynasty for one of his daughters. Taizong rejected the king's proposal, considering Tibetans "barbarians", and announced the marriage of one of his daughters to the king of Duyu, a Hun. This infuriated Gampo, who mounted attacks on tribal areas affiliated with the Tang dynasty and then attacked the Tang city of Songzhou. Telling the emperor that he would escalate his aggression unless the emperor agreed to his proposal, Gampo sent a conciliatory gift of a gold-studded "suit of armour" with another request for marriage. Taizong conceded, giving Princess Wencheng to the Tibetan king[12][11] 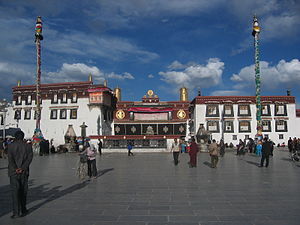 According to Chinese sources, Songtsen Gampo and Princess Wencheng married in hopes of promoting harmonious, matrimonial relationships between Tibet and China[13]. Both Chinese and Tibetan sources say that his marriages of states to Bhrikuti and Wencheng brought sacred images of Gautama Buddha and Buddhism in general to Tibet, and further, that their relationship as co-wives led to the construction of the Jokhang, and the city of Lhasa. According to Tibetan sources Songtsen Gampo married Princess Wencheng as a Buddhist princess to facilitate importing Buddhism to Tibet, and married her and the Nepali princess to obtain the two most venerable Buddhist statues for Tibet[8]

The stories of her matrimonial journey are evolving and ever increasing, and it is difficult to identify fiction from historical reality. These stories are included in such medieval romances as the Maṇi bka' 'bum and historiographies such as the Rgyal rabs Gsal ba'i Me long.

According to Chinese sources, in addition to the Chinese culture, Wencheng brought with her promises of trade agreements and safe passage on the Silk Road and a substantial amount of dowry which contained not only gold, but fine furniture, silks, porcelains, books, jewelry, musical instruments, and medical books.[13] Additionally and more importantly, Wencheng arrived with new agricultural methods. This included the introduction of seeds of grains and rapeseed, other farming tools and advice on how to increase Tibetan agricultural productivity, and other skills in metallurgy, farming, weaving, construction, manufacture of paper and ink. [13][14]

According to Chinese sources she was responsible for convincing Songsten Gampo to develop the Tibetan writing system, and to send the scholar Tonmi Sanbhoti to India to use Indic scripts for his model. Powers in his summary remarks that this is a curious suggestion for a Chinese princess to make as she would be unlikely to be familiar with the writing systems of India[14]. 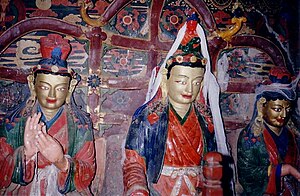 Statues of Songtsen Gampo with Princesses Wencheng and Bhrikuti in Gyantse

According to Chinese sources, Wencheng was revered for being one of the diplomat brides who brought much needed positive Han Chinese culture to the peoples beyond their borders - expanding their knowledge - whom the imperial court often looked down upon as barbaric.[13]

This is not corroborated by Tibetan sources.[15] Tibetans believe that it was Songtsen Gampo who promoted Tibet's technical and social progress by establishing his capital at Lhasa and building the powerful Tibetan Empire, and whose main building strategy was purposely to seek ways to introduce new cultures into his kingdom.[13]

Tradruk Temple in Nêdong is also connected with Wencheng: a thangka embroidered by Wencheng is kept in one of its chapels.

Wencheng's legacy and influence lives on. Generations of poets continue to write countless verses to praise her doings. Two traditional days, the fifteenth day of the fourth month and the fifteenth day of the tenth month of each Tibetan year, are marked by singing and dancing in her honor. Historic relics such as the statues of Songtsen Gampo with Princess Wencheng are still worshiped and displayed for all to see along the trail of their wedding trip as well as in the Potala Palace at Lhasa.[16]