A pure land is the celestial realm or pure abode of a buddha or bodhisattva in Mahayana Buddhism. The term "pure land" is particular to East Asian Buddhism (Chinese: 淨土, Jìngtǔ) and related traditions; in Sanskrit the equivalent concept is called a "buddha-field" (Sanskrit buddhakṣetra). The various traditions that focus on pure lands have been given the nomenclature Pure Land Buddhism. Pure lands are also evident in the literature and traditions of Taoism and Bon.

In the Mahayana sutras, there are many pure lands.[1][2][3][4] Bodhisattvas such as Avalokiteśvara and Manjusri would obtain pure lands after they attained buddhahood.[5]

In the Lotus Sutra, Buddha's close followers such as Śāriputra, Mahākāśyapa, Subhuti, Maudgalyāyana and Buddha's son Rāhula would also have pure lands. The relative time-flow in the pure lands may be different,[6] with a day in one pure land being equivalent to years in another.

Pure lands have been documented as arising due to the intention and aspiration of a bodhisattva such as the case of Amitābha, but other discourse has codified that they are entwined with the theory of the sambhogakāya and are understood to manifest effortlessly and spontaneously due to other activities of a Buddha and the pure qualities and the mysteries of the Three Vajras. The five features of Buddhahood - the attributes of the sambhogakāya - play a role: perfect teacher, teaching, retinue, place and time.Dudjom Jigdral Yeshe Dorje 2012, p. 1991

Nakamura (1980, 1987: p. 207) establishes the Indian background of the padma imagery of the field which is evident iconographically, as well as in motif and metaphor:

The descriptions of Pure Land in Pure Land sutras were greatly influenced by Brahmin and Hindu ideas and the topological situation in India. There was a process of the development of lotus (padma)-symbolism in Pure Land Buddhism. The final outcome of the thought was as follows: the aspirants of faith and assiduity are born transformed (anupapāduka) in the lotus flowers. But those with doubts are born into the lotus-buds. They stay in the calyx of a lotus (garbhāvāsa) for five hundred years without seeing or hearing the Three Treasures. Within the closed lotus-flowers they enjoy pleasures as though they were playing in a garden or palace.

The Princeton Dictionary of Buddhism states that "The heavens of the realm of subtle materiality (rūpadhātu) consist of sixteen (according to the Sarvāstivāda school), seventeen (the Sautrantika school), or eighteen levels (the Theravada/Sthavirankāya school) of devas ... The last five heavens are collectively designated as the five pure abodes, and the divinities residing there are called the Śuddhāvāsakāyika devas."[7]

Very important to all pure abodes is the 'Source' (Tibetan: ཆོས་འབྱུང, Wylie: chos 'byung; Sanskrit: dharmodaya) from which they dwell and which supports them, the 'Wellspring' of myriad fonts as emergent. It may be understood as an interface, portal or epiphany between the Dharmakaya and the Sambhogakaya. It is seminal in the establishment of mandalas governing the outer, inner or secret dimensions. It is the opening and consecration of the sacred space which enfolds and supports the expanse of the pure abode. In iconography it is represented by the six-pointed star, the two interlocking offset equilateral triangles that form a symmetry. This is the 'sanctum sanctorum' (Sanskrit: garbha gṛha). It later developed into the primordial purity of the lotus which supports the mandala, thangka or the murti of the deity. In temple siting it is the power place or 'spirit of place' that was augured or divined in the sacred geometry of 'geodesy' (Sanskrit: vāstu śāstra). In yoga asana, the 'source' is Vajrasana, the 'seat of enlightenment' the ancient name of Bodh Gaya and an alternate name for mahamudra or padmasana.[9]

"Source of phenomena or qualities (chos 'byung, dharmodaya). Pundarika defines dharmodaya as that from which phenomena devoid of intrinsic nature originate. "Phenomena devoid of intrinsic nature" refers to the ten powers, the four fearlessnesses, and the other 84,000 aspects of the teachings. Their source, dharmodaya, is the pure realm, the abode of all buddhas and bodhisattvas, the place of bliss, the place of birth; it is not the place that discharges blood, urine, and regenerative fluids, i.e., the vagina. Source: Stainless Light, Toh. 1347, vol. Da, f237a3-5".[10]

The Śuddhāvāsa (Pāli: Suddhāvāsa; Tib: gnas gtsang.ma) worlds, or "Pure Abodes", are distinct from the other worlds of the Rūpadhātu in that they do not house beings who have been born there through ordinary merit or meditative attainments, but only those Anāgāmins ("Non-returners") who are already on the path to Arhat-hood and who will attain enlightenment directly from the Śuddhāvāsa worlds without being reborn in a lower plane (Anāgāmins can also be born on lower planes). Every Śuddhāvāsa deva is therefore a protector of Buddhism. (Brahma Sahampati, who appealed to the newly enlightened Buddha to teach, was an Anagami from a previous Buddha[11]). Because a Śuddhāvāsa deva will never be reborn outside the Śuddhāvāsa worlds, no Bodhisattva is ever born in these worlds, as a Bodhisattva must ultimately be reborn as a human being through their 'compassion' (Sanskrit: Karuṇā) and bodhisattva vows.

Chagdud Tulku Rinpoche, in discussing the mindstream of Lokeṣvararāja (Japanese: Seijizaio Nyorai) that in fulfillment has come to be known as Amitābha:

According to the sutra known as the Rolling of Drums, countless eons ago there was a joyous kingdom whose sovereign had great devotion for the buddha of that time, Lokesvararaja. The king renounced his kingdom, became a monk, and vowed to reach enlightenment. He expressed his bodhicitta intention through forty-eight vows, and promised to refuse buddhahood if any of these vows were not fulfilled. With these words, the earth trembled and flowers rained down from the skies. Praises resounded and with them the prophecy that this monk would surely become a buddha. And so he did, as the Buddha Amitabha.

In his lifetime as this bodhisattva monk, Amitabha saw that countless pure realms existed for realized ones who had been victorious over the mind's delusions, but no such realm was accessible to those still struggling on the path. Among his forty-eight vows was the aspiration to create a pure realm for all those who heard his name, wished to attain that realm, established the roots of virtue, and dedicated their merit in order to be reborn there. So powerful was his intention that he swore to refuse buddhahood if it did not enable him to manifest such a realm.[12]

Sukhavati is by far the most popular among pure land Buddhists. There are many old and recent Buddhist texts reporting the condition of its dying believers. Some Buddhists and followers of other religions claimed they went there and came back, and they were viewed as cults.[13][14][15][16]

Some controversial teachings said the successors of Amitabha in Sukhāvatī would be Avalokitesvara and Mahasthamaprapta.[17][18][19][20]

The Field of Merit (Wylie: tshogs zhing) is a pictorial representation in tree form of the triratna and the guru, employed in Tibetan Buddhism as an object of veneration when taking refuge. It is visualized internally as a part of the commencement phase of each sadhana.

The Field of Merit is a Pure Land. Each school or sect has its own distinctive form of the tree in which the numerous lineage-holders or vidyadhara and dharma protectors or dharmapala are represented.

In discussing the visualisation of the Merit Field, Namkha'i links the Three Jewels of Buddha, Dharma and Sangha with the Three Roots of Guru, Deva and Dakini:

The merit field (tshogs zhing), that is the source of all the accumulation of merit, designates the manifestation of the Three Jewels (Buddha, Dharma, Sangha) and of the Three Roots (Guru, Deva, Dakini) visualised by the practitioner.[55] 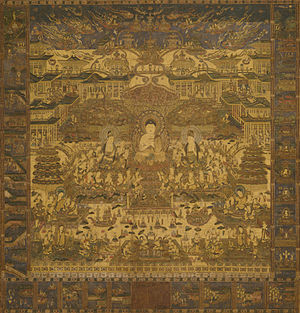 Mandala, especially sand mandala, are 'pure lands' and may be understood as nirmanakaya, as are all murti, thanka and sacred tools that have consecrated, dedicated and the 'deity' (Sanskrit: ishtadevata) invoked and requested to reside.[clarification needed] Some namkha are pure lands. According to Nirmanakaya (as tulku) theory, nirmanakaya spontaneously arise due to the intention, aspiration, faith and devotion of the sangha.