Rajagriha (Skt. Rājagṛha; P. Rājagaha; T. rgyal po'i khab རྒྱལ་པོའི་ཁབ་; C. wangshe cheng) was an important site for the teachings of the Buddha. It is one of the eight pilgrimage sites of the Buddhist tradition.

During the time of the Buddha, was the capital of the kingdom of Magadha and the home of its king, Bimbisāra.

After attaining enlightenment, the Buddha visited King Bimbisāra and taught the dharma to the king and his entourage. Bimbisāra became a great patron of the Buddha and he donated land for the sangha to stay at during retreats.

Vulture's Peak Mountain is in the proximity of Rajagriha. The monastic university of Nalanda was located on the outskirts of the city.

The modern name of this city is Rajgir. 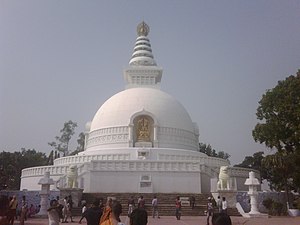