He was taken to the Palpung Monastery where the 11th Tai Situpa, Pema Wangchok, gave him ordination, the Bodhisattva vows and many teachings. Beru Khyentse Lodro Miza Pampa'i Gocha taught him the tantras. Bo Kangkar Rinpoche taught him the sutras. Jamgon Palden Kyentse Oser taught him Mahamudra and the Six Yogas of Naropa. He regarded the 11th Tai Situpa, Pema Wangchok, and the 2nd Jamgön Kongtrül Khyentse Öser as his root gurus.[1] In 1931, at the age of seven, he performed his first Black Crown ceremony. He received his hair cutting ceremony at age thirteen from Thubten Gyatso, 13th Dalai Lama.[2]

During his education he received all the Kagyu transmissions and was also taught by the Sakya Trizin for many years. In the beginning of 1940 he went into retreat, and in 1947 started a pilgrimage to India together with Tenzin Gyatso, the 14th Dalai Lama.[3] Rangjung continued his education with the 10th Mindrolling Trichen of the Nyingma School and it was concluded with the Kalachakra initiation of the Gelugpa School. Rangjung had therefore received all the major teachings of all the major Tibetan Buddhist schools.

Political circumstances altered Tibet radically with the 1950 takeover by China. Karmapa, along with the Dalai Lama, government officials, and other high lamas, attended talks in Beijing to negotiate a settlement. This succeeded for a while, but in 1959 the Chinese government insisted on land reform, and the conflict with the lamas who owned a lot of land accelerated.

In February of that year Karmapa took 160 students from Tsurphu Monastery and escaped to Bhutan, taking the lineage's most sacred treasures and relics with them.[4]

Tashi Namgyal, the King of Sikkim, offered land to the Karmapa near the site where the 14th Karmapa had established a monastery. It was here that his new seat, Rumtek Monastery, was built in 1966. The traditional seat of the Karmapa, Tsurphu Monastery, still exists, but the number of monks is restricted.[5] 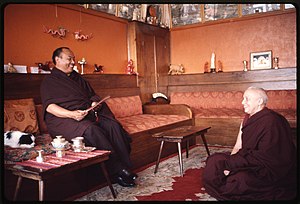 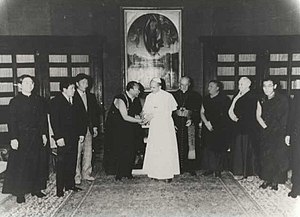 Focus on the West

In the beginning of the 1970s the Karmapa made the prediction[citation needed] that Tibet would have a hard struggle gaining independence and even if it did, it would not allow the refugees to return. Rumtek would not be a good place either, and although Sikkim and Bhutan are still stable, they can deteriorate as well. However the Western world will embrace Buddhism, so he sent Lama Gendün to Europe.[6]

In 1974, with the help of Freda Bedi, he embarked on his first world tour, travelling to Europe, Canada and the United States, giving several Black Crown ceremonies, and attended an audience granted by Pope Paul VI. In 1976-77 he began a more exhaustive tour, giving extensive teachings, visiting nearly every major city in Europe.

The sixteenth Karmapa helped foster the transmission of Tibetan Buddhism to the West. He established Dharma centers and monasteries in various places around the world in order to protect, preserve, and spread Buddha's teachings. As part of an initiative by the Tibetan government-in-exile to consolidate the organizations of Tibetan Buddhism, Rangjung Rigpe Dorje became the first formal head of the Kagyu School, although the earlier Karmapas had long been considered the most prestigious and authoritative lamas of that school.

In 1980-81 the Karmapa began his last world tour, giving teachings, interviews and empowerments in South East Asia, Greece, England and the United States. Rangjung Rigpei Dorjé died on November 5, 1981 in the United States in a hospital in Zion, Illinois. Doctors and nurses at the hospital remarked on his kindness and how he seemed more concerned with their welfare than his own.[7]

One doctor was also struck by the Karmapa's refusal of pain medication and the absence of any signs of feeling the profound pain that most patients in his condition report.[7] Upon his death, against hospital procedure but in keeping with Tibetan tradition and with special permission from the State of Illinois, his body was left in the hospital for three days and his heart remained warm during this time.[8][9][10]

He was cremated in Rumtek.[11]

Like his predecessors, he was primarily a spiritual figure and therefore not involved in politics. He instead made efforts to keep the spiritual traditions of Tibet intact and in this way helped to preserve the identity of Tibet as a unique and individual culture.[citation needed].

Rangjung Rigpe Dorje, as with all other Karmapas and tulkus, is accepted by Tibetan Buddhists as a manifestation of an enlightened being.[12]

The 16th Karmapa was very fond of watches. He had a collection of various kind of watches. One of his favourite was a 1800s pocket watch, which he gifted to Gyan Jyoti.