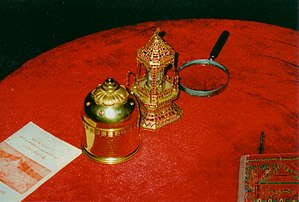 Śarīra is a generic term referring to Buddhist relics, although in common usage it usually refers to pearl or crystal-like bead-shaped objects that are purportedly found among the cremated ashes of Buddhist spiritual masters. Relics of the Buddha after cremation are termed dhātu in the Mahaparinibbana Sutta.[1] Śarīra are held to emanate or incite 'blessings' and 'grace' (adhiṣṭhāna) within the mindstream and experience of those connected to them.[2] Sarira are also believed to ward off evil in the Himalayan Buddhist tradition.

Śarīra originally meant "body" in Sankrit, but when used in Buddhist Hybrid Sanskrit texts to mean "relics", it is always used in the plural: śarīrāḥ. The term ringsel is a loanword from the Tibetan language. Both of these terms are ambiguous in English; they are generally used as synonyms, although according to some interpretations, ringsels are a subset of śarīras.