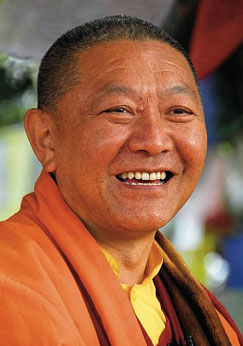 Ringu Tulku Rinpoche (b. 1952) is a Tibetan Buddhist teacher of the Kagyu tradition. He was born in Kham Lingtsang, in eastern Tibet, and was recognized by Sixteenth Gyalwang Karmapa as the incarnation of one of the tulkus of Ringul monastery, a Kagyüpa monastery in his home province.