Rinzai is the Japanese line of the Chinese Linji school, which was founded during the Tang dynasty by Linji Yixuan (Japanese: Rinzai Gigen).

Though there were several attempts to establish Rinzai lines in Japan, it first took root in a lasting way through the efforts of the monk Myōan Eisai. In 1168, Myōan Eisai traveled to China, whereafter he studied Tendai for twenty years.[1] In 1187, he went to China again, and returned to establish a Linji lineage, which is known in Japan as Rinzai.[2] Decades later, Nanpo Shōmyō (南浦紹明) (1235–1308) also studied Linji teachings in China before founding the Japanese Ōtōkan lineage, the most influential and only surviving branch of Rinzai.

The time during which Rinzai Zen was established in Japan also saw the rise of the samurai to power. Along with early imperial support, Rinzai came to enjoy the patronage of this newly ascendant warrior class.

During the Muromachi period, the Rinzai school was the most successful of the schools because it was favoured by the shōgun. The school may be said to have truly flowered and achieved a distinctly Japanese identity with Shūhō Myōchō (aka Daitō Kokushi 1283–1337) and Musō Soseki (1275–1351), two influential Japanese Zen masters who did not travel to China to study.

In the beginning of the Muromachi period, the Five Mountain System (Gozan) system was fully worked out. The final version contained five temples of both Kyoto and Kamakura, presided over by Nanzen-ji. A second tier of the system consisted of Ten Temples. This system was extended throughout Japan, effectively giving control to the central government, which administered this system.[3] The monks, often well educated and skilled, were employed by the shōgun for the governing of state affairs.[4]

Myōan Eisai, founder of the Rinzai school of Zen in Japan, 12th century

Not all Rinzai Zen organisations were under such strict state control. The Rinka monasteries, which were primarily located in rural areas rather than cities, had a greater degree of independence.[5] The Ōtōkan lineage, which centered on Daitoku-ji, also had a greater degree of freedom. It was founded by Nanpo Shōmyō, Shūhō Myōchō, and Kanzan Egen.[6] A well-known teacher from Daitoku-ji was Ikkyū.[2]

Another Rinka lineage was the Hotto lineage, of which Bassui Tokushō is the best-known teacher.[7]

By the 18th century, the Rinzai school had entered a period of stagnation and decline. At that time, the monk Hakuin Ekaku (1686–1769) became prominent as a revitalizer and organizer of Rinzai Zen, and his vigorous methods spearheaded a long-lasting revival. Hakuin's systemization of the kōan training system serves today as the framework of formal Rinzai practice.

Most Rinzai lineages pass through Hakuin Ekaku, the 18th century revivalist, who considered himself to be an heir of Shōju Rōnin (Dokyō Etan, 1642–1721), though Hakuin's formal dharma transmission from Shōju Rōnin entails some unanswered questions,.[8][web 1] When he was installed as head priest of Shōin-ji in 1718, he had the title of Dai-ichiza, "First Monk":[9]

It was the minimum rank required by government regulation for those installed as temple priests and seems to have been little more than a matter of paying a fee and registering Hakuin as the incumbent of Shōin-ji.[9]

Through Hakuin, all contemporary Japanese Rinzai-lineages are part of the Ōtōkan lineage, brought to Japan in 1267 by Nanpo Jomyo, who received his dharma transmission in China in 1265.[web 2]

During the Meiji period (1868–1912), after a coup in 1868, Japan abandoned its feudal system and opened up to Western modernism. Shinto became the state religion, and Buddhism adapted to the new regime. Within the Buddhist establishment the Western world was seen as a threat, but also as a challenge to stand up to.[13][14]

A Rinzai university was founded in 1872, Hanazono University, initially as a seminary for those entering the priesthood. 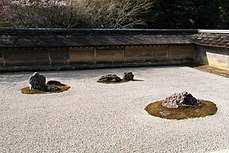 The dry garden at Ryōan-ji, a Rinzai Zen temple in Kyoto

Rinzai Zen is marked by the emphasis it places on kenshō ("seeing one's true nature") as the gateway to authentic Buddhist practice, and for its insistence on many years of exhaustive post-kensho training to embody the free functioning of wisdom within the activities of daily life.

When engaged in zazen, kōans are frequently the object of meditation, while shikantaza ("just sitting") is less emphasized, but still used. This contrasts with Sōtō practice, which has de-emphasized kōans since Gentō Sokuchū (circa 1800), and instead emphasizes shikantaza. In general, the Rinzai school is known for the rigor and severity of its training methods.

The Rinzai style of Zen practice may be characterized as somewhat martial or sharp (following in the spirit of Linji Yixuan). In this regard, Rinzai is often contrasted with another sect of Zen deeply established in Japan, Sōtō, which has been called more gentle and even rustic in spirit. A Japanese saying reflects these perceptions: "Rinzai for the Shōgun, Sōtō for the peasants" (臨済将軍、曹洞土民, Rinzai Shōgun, Sōtō Domin).

Rinzai Zen in Japan today is not a single organized body. Rather, it is divided into 15 branches (or 16, if Ōbaku is included), referred to by the names of their head temples, of which half are based in Kyoto (8, plus Ōbaku). The largest and most influential of these is the Myōshin-ji branch, whose head temple was founded in 1342 by Kanzan Egen (1277–1360). Other major branches include Nanzen-ji and Tenryū-ji (both founded by Musō Soseki), Daitoku-ji (founded by Shūhō Myōchō), and Tōfuku-ji (founded by Enni Ben'en, 1202–1280). These branches are purely organizational divisions arising from temple history and teacher-student lineage, and do not represent sectarian divides or fundamental differences in practice. There are nevertheless small differences in the way kōans are handled.

These head temples preside over various networks, comprising a total of approximately six thousand temples, forty monasteries, and one nunnery. The Myōshin-ji branch is by far the largest, approximately as big as the other branches combined: it contains within it about three thousand five hundred temples and nineteen monasteries.

The following temple, also in Kyoto, needs to be included as one of the head temples:

Aside from Rinzai and Sōtō, there is a third tradition of Zen present in Japan, the Ōbaku Zen sect. It was brought to Japan in the 17th century, and shows significant influence from the Pure Land school. This reflects the syncretistic tendencies that developed in Chinese Buddhism in the centuries after the earlier Rinzai lines had been transmitted to Japan.

Ōbaku is also descended from the Chinese Linji school, and so technically may be considered a part of the Japanese Rinzai movement; further, its abbots are now part of the same Ōtōkan lineage as Rinzai branches, though they were not so originally (instead following a more recent Chinese lineage). While Manpuku-ji, the Ōbaku headquarters temple, is considered one of the 15 Rinzai branches mentioned above, Ōbaku Zen is administratively separate from the other 14 branches and continues to maintain its own distinct identity.

A final Japanese Zen sect that self-identified as descending from the Linji school was the Fuke sect; Fuke Zen was suppressed with the Meiji Restoration in the 19th century and no longer exists. Its influence on the development of music for the shakuhachi (bamboo flute), however, has been great.

Ichibata Yakushi Kyodan (properly written Ichiba Yakushi Kyōdan 一畑薬師教団) is today generally considered an independent school of Buddhism, though it was previously associated with Myōshin-ji (and before that Tendai), and may still be considered part of Rinzai, though its practices and beliefs have little in common with Rinzai. It places great importance in faith in Yakushi (Medicine Buddha), and is known as a destination for healing.

Remarkable results of the early relationship between Rinzai Zen and the ruling classes were a strong Rinzai influence on education and government, and Rinzai contributions to a great flowering of Japanese cultural arts such as calligraphy, painting, literature, tea ceremony, Japanese garden design, architecture and even martial arts. A perhaps unanticipated result is that Soto Zen temples, with their connection and appeal to commoners, eventually came to outnumber Rinzai temples.