Mapping of sacred mountains of China. 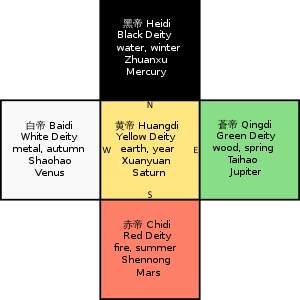 The five elements, cosmic deities, historical incarnations, chthonic and dragon gods, and planets, associated to the five sacred mountains. This Chinese religious cosmology shows the Yellow Emperor, god of the earth and the year, as the centre of the cosmos, and the four gods of the directions and the seasons as his emanations. The diagram is based on the Huainanzi.[2]

The Five Great Mountains or Wuyue are arranged according to the five cardinal directions of Chinese geomancy, which includes the center as a direction. The grouping of the five mountains appeared during the Warring States period (475 BC – 221 BC),[3] and the term Wuyue ("Five Summits") was made popular during the reign of Emperor Wudi of the Western Han Dynasty 140-87 BC.[1] In Chinese traditional religion they have cosmological and theological significance as the representation, on the physical plane of earth, of the ordered world emanating from the God of Heaven (Tian–Shangdi), inscribing the Chinese territory as a tán 壇, "altar", the Chinese concept equivalent of the Indian mandala.

The five mountains are among the best-known natural landmarks in Chinese history, and since the early periods in Chinese history, they have been the ritual sites of imperial worship and sacrifice by various emperors.[4] The first legendary sovereigns of China went on excursions or formed processions to the summits of the Five Great Mountains. Every visit took place at the same time of the year. The excursions were hunting trips and ended in ritual offerings to the reigning god.

The emperors, starting with the First Emperor of Qin, formalized these expeditions and incorporated them into state ritual as prescribed by Confucianism. With every new dynasty, the new emperor hurried to the Five Great Mountains in order to lay claim to his newly acquired domains. Barring a number of interruptions, this imperial custom was preserved until the end of the last dynasty, when, after the fall of the Qing Dynasty in 1911, Yuan Shikai had himself crowned as emperor at the Temple of Heaven in Beijing. But just to be safe, he also made an offer to the god of the northern Mount Heng.

In the 2000s formal sacrifices both in Confucian and Taoist styles have been resumed. The Five Great Mountains have become places of pilgrimage where hundreds of pilgrims gather in temples and caves. Although the Five Great Mountains are not traditionally canonized as having any exclusive religious affiliations, many of them have a strong Taoist presence,[4] thus the five mountains are also grouped by some as part of "Sacred Taoist Mountains".[5] There are also various Buddhist temples and Confucian academies built on these mountains.

In ancient times mountains were places of authority and fear, ruled by dark forces and faithfully worshipped. One reason for such worship was the value of the mountains to human existence as a spring of welfare and fertility, as the birthplace of rivers, as a place where herbs and medicinal plants grew and as a source of materials to build houses and tools. A basic element of Taoist thought was, and still is, an intuitive feeling of connectedness with nature. As early as the fourth century, the Taoists presented the high priests with the 180 precepts of Lord Lao for how to live a good and honest life. Twenty of these precepts focused explicitly on the conservation of nature, while many other precepts were indirectly aimed at preventing the destruction of nature. Respect for nature has been a key component of Taoism from the very outset and, in its own right, explains why the Five Great Mountains are considered sacred. In addition, Taoists consider mountains as a means of communication between heaven and earth and as the place where immortality can be found. The sanctity of the Five Great Mountains is the reason why even today these mountains still host an exceptional diversity of plants, trees and animal species.

According to Chinese mythology, the Five Great Mountains originated from the body of Pangu (盤古/盘古 Pángǔ), the first being and the creator of the world. Because of its eastern location, Mount Tài is associated with the rising sun which signifies birth and renewal. Due to this interpretation, it is often regarded as the most sacred of the Five Great Mountains. In accordance with its special position, Mount Tài is believed to have been formed out of Pangu's head. Mount Heng in Hunan is believed to be a remainder of Pangu's right arm, Mount Heng in Shanxi of his left arm, Mount Song of his belly, and Mount Hua of his feet.[6][7]

The Four Sacred Mountains of Buddhism

The Roushen Temple at Jiuhua Shan

Wutai is the home of the Bodhisattva of wisdom, Manjusri or Wenshu (Traditional: 文殊) in Chinese.

The patron bodhisattva of Emei is Samantabhadra, known in Chinese as Puxian (普贤菩萨).

Many of the mountain's shrines and temples are dedicated to Ksitigarbha (known in Chinese as Dìzàng, Chinese: 地藏, in Japanese as Jizō), who is a bodhisattva and protector of beings in hell realms

This mountain is considered the bodhimanda of Avalokitesvara (Guan Yin), bodhisattva of compassion. It became a popular pilgrimage site and received imperial support in the Song Dynasty.[11]

The Four Sacred Mountains of Taoism

Other mountains with spiritual/religious significance in China