This articles concerns the Sakya school of Tibetan Buddhism. For information on the ancient Śākya tribe, see Shakya.

The Sakya (Tibetan: ས་སྐྱ་, Wylie: sa skya, "pale earth") school is one of four major schools of Tibetan Buddhism, the others being the Nyingma, Kagyu, and Gelug. It is one of the Red Hat Orders along with the Nyingma and Kagyu. 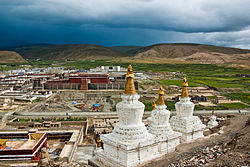 The name Sakya ("pale earth") derives from the unique grey landscape of Ponpori Hills in southern Tibet near Shigatse, where Sakya Monastery, the first monastery of this tradition, and the seat of the Sakya School was built by Khon Konchog Gyalpo (1034–1102) in 1073.

The Sakya tradition developed during the second period of translation of Buddhist scripture from Sanskrit into Tibetan in the late 11th century. It was founded by Drogmi, a famous scholar and translator who had studied at the Vikramashila directly under Naropa, Ratnākaraśānti, Vagishvakirti and other great panditas from India for twelve years.[1]

Konchog Gyalpo became Drogmi's disciple on the advice of his elder brother.[2][3]

The tradition was established by the "Five Venerable Supreme Masters" starting with the grandson of Khonchog Gyalpo, Sachen Kunga Nyingpo, who became known as Sachen, or "Great Sakyapa":[4][5]

Buton Rinchen Drub (1290–1364) was an important scholar and writer and one of Tibet's most celebrated historians. Other notable scholars of the Sakya tradition are the so-called "Six Ornaments of Tibet:"

The leadership of the Sakya School is passed down through a hereditary system between the male members of the Sakya branch of the Khon family. 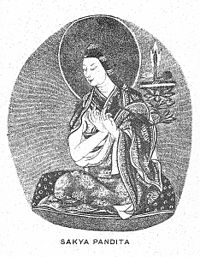 Sachen, the first of the five supreme masters, inherited a wealth of tantric doctrines from numerous Tibetan translators or "lotsawas" who had visited India: most importantly Drokmi Lotsawa,[3] Bari Lotsawa and Mal Lotsawa.[8] From Drokmi comes the supreme teaching of Sakya, the system of Lamdre "Path and its Fruit" deriving from the mahasiddha Virupa based upon the Hevajra Tantra. Mal Lotsawa introduced to Sakya the esoteric Vajrayogini lineage known as "Naro Khachoma." From Bari Lotsawa came innumerable tantric practices, foremost of which was the cycle of practices known as the One Hundred Sadhanas. Other key transmissions that form part of the Sakya spiritual curriculum include the cycles of Vajrakilaya, Mahākāla and Guhyasamāja tantras.

The main Dharma system of the Sakya school is the "Path with its Result" (Wylie: lam dang 'bras bu bcas), which is split into two main lineages, "Explanation for the Assembly" (Wylie: tshogs bshad) and the "Explanation for Close Disciples" (Wylie: slobs bshad).

The other major system of the Sakya school is the "Naropa Explanation For Disciples" (Wylie: nā ro mkha spyod slob bshad).

In due course, two subsects emerged from the main Sakya lineage,

There were three "mother" monasteries of the Sakya school: Sakya Monastery, founded in 1073, Ngor Evam Choden, founded in 1429, and Phanyul Nalendra in Phanyul, north of Lhasa, founded in 1435 by Kuntchen Rongten. Nalendra became the home of the 'whispered-lineage' of the Tsar school.[10]

The Bodongpa tradition, founded by Bodong Panchen Chögle Namgyel [1376 1451], is considered by some scholars to be a sub-sect of the Sakya tradition.[citation needed]

See also: Tibet under Yuan rule, Bureau of Buddhist and Tibetan Affairs, and List of rulers of Tibet 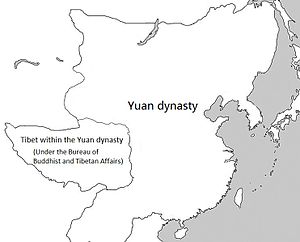 Tibet within the Yuan dynasty under the top-level department known as the Bureau of Buddhist and Tibetan Affairs (Xuanzheng Yuan).

The Mongol conquest of Tibet began after the foundation of the Mongol Empire in the early 13th century. In 1264, the feudal reign over Tibet was given to Drogön Chögyal Phagpa by Kublai Khan, founder of the Yuan dynasty. Sakya lamas, along with Sakya Imperial Preceptors and dpon-chens continued to serve as viceroys or administrators of Tibet on behalf of Yuan emperors for nearly 75 years after Phagpa’s death in 1280 until the Yuan dynasty was greatly weakened by the Red Turban Rebellion in the 1350s, a decade before the Ming dynasty founded by the Han Chinese overthrew Mongol rule in China.

The leaders of the Sakya regime were as follows.

The head of the Sakya school, known as Sakya Trizin ("holder of the Sakya throne"), is always drawn from the male line of the Khön family. The present Sakya Trizin, Ngawang Kunga Tegchen Palbar Trinley Samphel Wanggi Gyalpo, born in Tsedong in 1945, is the forty-first to hold that office. 41st Sakya Trizin is the reincarnation of two great Tibetan masters: a Nyingmapa lama known as Apong Terton (Orgyen Thrinley Lingpa), who is famous for his Red Tara cycle, and his grandfather, the 39th Kyabgon Sakya Trizin Dhagtshul Thrinley Rinchen (1871–1936).[11] Today, he resides in Rajpur, India along with his wife, Gyalyum Kushok Tashi Lhakyi, and two sons Ratna Vajra Rinpoche and Gyana Vajra Rinpoche. Ratna Vajra Rinpoche being the older son, is the lineage holder and is married to Dagmo Kalden Dunkyi Sakya and Gyana Vajra Rinpoche is married to Dagmo Sonam Palkyi Sakya.

Traditionally hereditary succession alternates between the two Sakya palaces since Khon Könchok Gyelpo's (1034–1102) reign. The Ducho sub-dynasty of Sakya survives split into two palaces, the Dolma Phodrang and Phuntsok Phodrang. Sakya Trizin is head of the Dolma Phodrang. Jigdal Dagchen Sakya (1929–2016) was the head of the Phuntsok Phodrang, and lived in Seattle, Washington, where he co-founded Sakya Monastery of Tibetan Buddhism with Dezhung Rinpoche III, and constructed the first Tibetan Buddhist Monastery in the United States. Dagchen Sakya's father was the previous Sakya Trizin, Trichen Ngawang Thutop Wangchuk, throne holder of Sakya, and his mother Dechen Drolma. Dagchen Sakya was married to Her Eminence Dagmo Jamyang Kusho Sakya; they have five sons, and several grandchildren.

Having seen how the Gelug institutions pushed the other traditions into the corners of Tibet's cultural life, Jamyang Khyentse Wangpo and Jamgön Kongtrül compiled together the teachings of the Sakya, Kagyu and Nyingma, including many near-extinct teachings.[12] Without Khyentse and Kongtrul's collecting and printing of rare works, the suppression of Buddhism by the Communists would have been much more final.[13]