From Encyclopedia of Buddhism
(Redirected from Samādhi)
Jump to: navigation, search 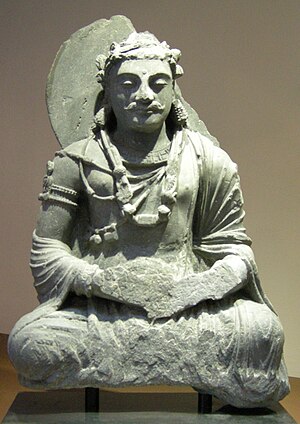 Samādhi is identified within the Buddhist teachings in the following contexts:

The etymology of the Sanskrit term samādhi for “concentration” has the connotation of “apprehending correctly,” or that the mind continuously and firmly apprehends its object, hence the word concentration.[1]

In The Noble Eightfold Path: The Way to End Suffering, Bhikkhu Bodhi states:

Concentration represents an intensification of a mental factor present in every state of consciousness. This factor, one-pointedness of mind (citt'ekaggata), has the function of unifying the other mental factors in the task of cognition. It is the factor responsible for the individuating aspect of consciousness, ensuring that every citta or act of mind remains centered on its object. At any given moment the mind must be cognizant of something — a sight, a sound, a smell, a taste, a touch, or a mental object. The factor of one-pointedness unifies the mind and its other concomitants in the task of cognizing the object, while it simultaneously exercises the function of centering all the constituents of the cognitive act on the object. One-pointedness of mind explains the fact that in any act of consciousness there is a central point of focus, towards which the entire objective datum points from its outer peripheries to its inner nucleus.

However, samadhi is only a particular kind of one-pointedness; it is not equivalent to one-pointedness in its entirety. A gourmet sitting down to a meal, an assassin about to slay his victim, a soldier on the battlefield — these all act with a concentrated mind, but their concentration cannot be characterized as samadhi. Samadhi is exclusively wholesome one-pointedness, the concentration in a wholesome state of mind. Even then its range is still narrower: it does not signify every form of wholesome concentration, but only the intensified concentration that results from a deliberate attempt to raise the mind to a higher, more purified level of awareness.

The commentaries define samadhi as the centering of the mind and mental factors rightly and evenly on an object. Samadhi, as wholesome concentration, collects together the ordinarily dispersed and dissipated stream of mental states to induce an inner unification. The two salient features of a concentrated mind are unbroken attentiveness to an object and the consequent tranquillity of the mental functions, qualities which distinguish it from the unconcentrated mind. The mind untrained in concentration moves in a scattered manner which the Buddha compares to the flapping about of a fish taken from the water and thrown onto dry land. It cannot stay fixed but rushes from idea to idea, from thought to thought, without inner control. Such a distracted mind is also a deluded mind. Overwhelmed by worries and concerns, a constant prey to the defilements, it sees things only in fragments, distorted by the ripples of random thoughts. But the mind that has been trained in concentration, in contrast, can remain focused on its object without distraction. This freedom from distraction further induces a softness and serenity which make the mind an effective instrument for penetration. Like a lake unruffled by any breeze, the concentrated mind is a faithful reflector that mirrors whatever is placed before it exactly as it is.[2]

In the Path of Purification, Buddhaghosa states:

(i) WHAT IS CONCENTRATION?

Concentration is of many sorts and has various aspects. An answer that attempted to cover it all would accomplish neither its intention nor its purpose and would, besides, lead to distraction; so we shall confine ourselves to the kind intended here, calling concentration "profitable unification of mind (cittekaggata)."

(ii) IN WHAT SENSE IS IT CONCENTRATION?

(iii) WHAT ARE ITS CHARACTERISTIC, FUNCTION, MANIFESTATION, AND PROXIMATE CAUSE?

Concentration has non-distraction as its characteristic. Its function is to eliminate distraction. It is manifested as non-wavering. Because of the words, “Being blissful, his mind becomes concentrated” (D I 73), its proximate cause is bliss."[3]

The definition of concentration is: a mental factor that, by its own power, stabilizes the mind single-pointedly on its object and functions as the basis of wisdom. An example is a mental factor that, when fully focused on an attractive object, remains single-pointedly on that without moving away to something else. The Compendium of Knowledge says: "What is concentration? It is the single-pointedness of mind placed on the thing investigated, and it functions as the basis of wisdom."
To make the mind single-pointed necessarily means to focus intently on a single object without having a second object. Also, concentration is not the same as attention. Attention directs the mind with which it is concomitant to its object, but it does not, by its own power, give rise to wisdom; concentration does.
The etymology of the Sanskrit term samādhi for “concentration” has the connotation of “apprehending correctly,” or that the mind continuously and firmly apprehends its object, hence the word concentration. The function of concentration is to serve as a basis for wisdom, which is its effect. The Compendium of Ascertainments says: “What function does concentration have? It functions as a basis for wisdom.”[5]
The effect of concentration is as follows: in reliance on concentration, the wisdom of special insight arises. Also, it pacifies the mental disturbances and so on that come from attachment, excitation, scattering, and gross fluctuation of thought regarding the qualities of external sense objects, and it makes the mind and body serviceable and so on. The Great Final Nirvāṇa Sūtra says: “Śāriputra, one who has engaged in concentration meditation attains correct understanding and correct insight."[1]

The Buddhist Psychology of Awakening states:

“We come to factor four, samadhi, which is rendered by GK as “concentration” and by MBP as “intense concentration.”[6] It’s defined as being able to have the mind singly fixed. This refers to the well-known notion of “one-pointedness” in Buddhist texts; it is a single-minded concentration. If we can do this, its function is to support correct or “right” cognition. According to Buddhist traditions, if we want to see things “as they are,” we have to go into deep and precise focusing, deep and precise concentration. It doesn’t mean thinking hard about something. It means, rather, bringing the entire working of the mind, laser-like, to a very precise capacity to focus. This is what allows a full and correct awareness to emerge.
A common translation for this is “meditation.” Meditation here doesn’t mean some vague sense of being calm or spacious; it means being able to bring the mind to a very precise focus so that we can see what is going on as it goes on. You can see that, in a way, all of these factors are moving to an ever more focused and precise focusing. We can learn to apply that to any object whatsoever, any object that we may want to focus on.[7]

The Buddha identified right concentration (samma samādhi) as the eighth element in the Noble Eightfold Path.