Śrāmaṇeras from the tradition of Korean Buddhism
File:S. srilanka.jpg
Group of female novices in Sri Lanka

A sāmaṇera (Pali); Sanskrit śrāmaṇera, is a novice male monastic in a Buddhist context.[1] A female novitiate is a śrāmaṇerī or śrāmaṇerikā (Sanskrit; Pāli: sāmaṇerī).

The sāmaṇera is a Pali language diminutive of the Sanskrit term śrāmaṇa "strenuous", which indicates an ascetic practitioner. Therefore, sāmaṇera might be said to mean "small or young renunciate". In some South and Southeast Asian Buddhist traditions, the term refers to someone who has taken the initial pravrajya vows but not the upasampada or full ordination. The prātimokṣa rules do not apply to them and they do not take part in the recital of the rules on uposatha days.

The account provided in the literature of South Asian Buddhism (and adopted by other Buddhist sects) is that when Gautama Buddha's son Rāhula was seven years old, he followed the Buddha, saying "Give me my inheritance." The Buddha called Sariputta and asked him to ordain Rāhula, who became the first sāmaṇera.

The King (Suddhodana), discovering that now his grandson and a number of young men in the royal family had requested ordination, asked the Buddha only to ordain a minor with the consent of his parents or guardian. The Buddha assented. This rule was expanded to include the spouses of those intending to join the Order of monks and nuns".[2] 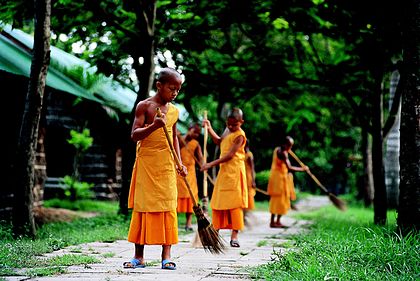 In the Vinaya (monastic regulations) used by many South Asian Buddhist sects, a man under the age of 20 cannot ordain as a bhikṣu (monk) but can ordain as a sāmaṇera. Sāmaṇeras (and sāmaṇerīs – the equivalent term for girls) keep the Ten Precepts as their code of behaviour and devote themselves to the religious life during breaks from secular schooling, or in conjunction with it if devoted to formal ordination. In other cultures and Buddhist traditions (particularly North East Asia, and those in the West that derive from these lineages), monks take different sets of vows, and follow different customary rules.

The Ten Precepts upheld by sāmaṇeras are:

After a year or at the age of 20, a sāmaṇera will be considered for the upasampada or higher ordination as a bhikṣu. Some monasteries will require people who want to ordain as a monk to be a novice for a set period of time, as a period of preparation and familiarization. Adults would normally wear the white robes of a Brahmin.

A woman is to be ordained, according to the traditional vinayas, by both a monk and a nun, first as a śrāmaṇerī. Śrāmaṇeras and śrāmaṇerīs keep the Ten Precepts as their code of behaviour, and are devoted to the Buddhist religious life during a break from secular schooling, or in conjunction with it if devoted to formal ordination.

After a year or at the age of 20, she will be ordained as a full bhikṣuṇī (Pali: bhikkhuni).