Samantabhadra (Sanskrit: समन्तभद्र; lit. "Universal Worthy") is a bodhisattva in Mahayana Buddhism associated with practice and meditation. Together with Gautama Buddha and his fellow bodhisattva Mañjuśrī, he forms the Shakyamuni trinity in Buddhism. He is the patron of the Lotus Sutra and, according to the Avatamsaka Sutra, made the ten great vows which are the basis of a bodhisattva. In Chinese Buddhism, Samantabhadra is known as Pǔxián and is associated with action, whereas Mañjuśrī is associated with prajñā (transcendent wisdom). In Japan, this bodhisattva is known as Fugen, and is often venerated in Tendai and Shingon Buddhism, and as the protector of the Lotus Sutra by Nichiren Buddhism. In the Nyingma school of Tibetan Buddhism, Samantabhadra is also the name of the Adi-Buddha – in indivisible Yab-Yum with his consort, Samantabhadrī.

In the Lotus Sūtra, Samantabhadra is described at length in the epilogue, called the Samantabhadra Meditation Sutra (Chinese: 觀普賢菩薩行法經; pinyin: Guān Pǔxián Púsà Xíngfǎ Jīng), with special detail given to visualization of the bodhisattva, and the virtues of devotion to him.[1]

Samantabhadra is also a key figure in the Āvataṃsaka-sūtra, particularly the last chapter, the Gaṇḍavyūha-sūtra. In the climax of the Gaṇḍavyūha-sūtra, the student Sudhana meets Samantabhadra Bodhisattva, who teaches him that wisdom only exists for the sake of putting it into practice; that it is only good insofar as it benefits all living beings.

In the Āvataṃsaka-sūtra, the Buddha states that Samantabhadra Bodhisattva made ten great vows in his path to full Buddhahood:

The ten vows have become a common practice in East Asian Buddhism, particularly the tenth vow, with many Buddhists traditionally dedicating their merit and good works to all beings during Buddhist liturgies. 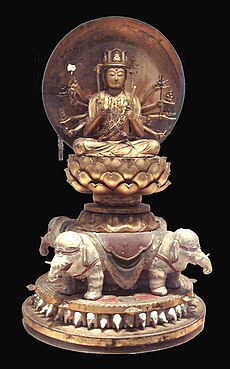 Unlike his more popular counterpart Mañjuśrī, Samantabhadra is only rarely depicted alone and is usually found in a trinity on the right side of Shakyamuni, mounted on a white elephant. In those traditions that accept the Avatamsaka Sutra as its root instruction, Samantabhadra and Manjusri flank Vairocana Buddha, the central Buddha of this particular sutra.

Known as Pǔxián in Chinese, he is sometimes shown in Chinese art with feminine characteristics, riding an elephant with six pairs of tusks while carrying a lotus leaf 'parasol' (Sanskrit: chatra), bearing similar dress and features to some feminine depictions of Guanyin. It is in this guise that Samantabhadra is revered as the patron bodhisattva of the monasteries associated with Mount Emei in western China. Some believe that the white elephant mount of Samantabhadra was the same elephant that appeared to Queen Maya, the mother of the Buddha, to herald his birth.

Mahayana esoteric traditions treat Samantabhada as one of the 'Primordial' (Sanskrit: Dharmakaya) Buddhas, but the main primordial Buddha is considered to be Vairocana.

It is very common for the bodhisattva of the Mahayana tradition with the name of Samantabhadra to be conflated with a Buddha with the same name that appears as the primordial Buddha in some of the Tibetan traditions, particularly the Nyingma. It is not the case that the Mahayana bodhisattva evolved or transformed in the course of assimilation into the esoteric Tibetan traditions, because in the latter both the Bodhisattva Samantabhadra and the Dharmakaya Samantabhadra are present as two separate and distinct entities.

Dzongsar Khyentse Rinpoche following the Nyingmapa Dzogchen tradition qualifies the nature and essence of Samantabhadra, the Primordial Buddha, as the origin-less wellspring of the timeless and unbounded Atiyoga teachings, and honours the converse view entertained by some interested parties which hold that the Dzogchen teachings originated with either the Bonpo tradition or the Chinese monk Moheyan:

'The Mirror of the Mind of Samantabhadra' (Tibetan: ཀུན་ཏུ་བཟང་པོ་ཐུགས་ཀྱི་མེ་ལོང, Wylie: kun tu bzang po thugs kyi me long) is one of the Seventeen Tantras of Dzogchen Upadesha.[4]

Sri Lankan people venerate Samantabhadra Bodhisattva as Saman (also called Sumana, Samantha, Sumana Saman, Sinhalese: සුමන සමන් ‍දෙවි). The name Saman means "the rising morning sun". The god Saman is considered to be one of the guardian deities of the island as well as a protector of Buddhism. His main shrine is located in Ratnapura, where there is an annual festival held in his honor.[5]