From Encyclopedia of Buddhism
(Redirected from Sangha (Buddhism))
Jump to: navigation, search 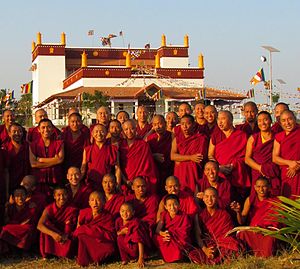 Monks outside the temple at the Tibetan Buddhist monastery, Rato Dratsang, in India, January 2015

Sangha (Skt. saṅgha; P. saṅgha; T. dge ’dun; C. sengqie; J. sōgya; K. sŭngga 僧伽) can be litterarly translated as "community", "association", "assembly", etc. In modern Western Buddhist communities, the term is typically used to refer to all the members of a particular community, whether lay or monasitc. Sometimes the monastics within a community are referred to as the "monastic sangha".

In early Buddhist traditions, and in more traditional Buddhist communities (such as those in Southeast Asia), the term sangha is used to refer primarily to the monastic community of monks and nuns (bhikkhus and bhikkhunis, respectively) and the community of arhats (those who have reached a high level of realization).

The monastic communities are traditionally referred to as the bhikkhu-sangha or bhikkhuni-sangha. The community of arhats, which includes both monastics and non-monastics, are referred to as the arya sangha ("noble Sangha").[1][2]

In a glossary of Buddhist terms,[3] Richard Robinson et al. present a traditional definition of sangha:

Sangha. Community. This word has two levels of meaning:

(1) on the ideal (arya) level, it denotes all of the Buddha’s followers, lay or ordained, who have at least attained the level of srotāpanna;

Mahayana practitioners may use the word "Sangha" as a collective term for all Buddhists, but the Theravada Pāli Canon uses the word pariṣā (Sanskrit pariṣad) for the larger Buddhist community — the monks, nuns, lay men, and lay women who have taken the Three Refuges — with a few exceptions[4] reserving "Sangha" for a its original use in the Pāli Canon — the ideal (arya) and the conventional.[5][6][7]

The two meanings overlap but are not necessarily identical. Some members of the ideal Sangha are not ordained; some monastics have yet to acquire the Dharma-eye.[6]

The original sangha refers to the first followers of the Buddha. The very first members of this sangha were the five ascetics, the five former companions of the Buddha who received his first teaching and immediately became his follers.

Within Buddhism, the Sangha is identified as the third of the Three Jewels.[9] Common over all schools is that the āryasaṅgha is the foremost form of this third jewel.

Qualities of the Sangha

In the Theravada Pali tradition, the Buddha, the Dharma and the Sangha each are described as having certain characteristics. These characteristics are chanted either on a daily basis and/or on Uposatha days, depending on the school of Buddhism. In Theravada tradition they are a part of daily chanting:

The Sangha: The Sangha of the Blessed One's disciples (sāvakas) is:

That is, the four pairs of persons, the eight types of individuals - This Sangha of the Blessed One's disciples is: