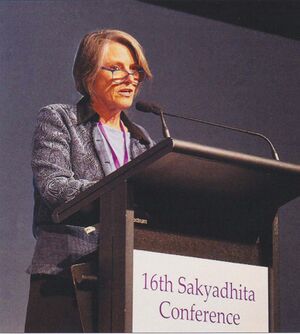 Sarah Harding an American-born translator and scholar in the Tibetan Buddhist tradition, known particularly for her translations of related to the practice of Chod.

"Sarah completed the first three-year retreat for westerners at Kagyu Ling, France, 1976–1980 and later served as a translator at Kagyu Shenpen Kunkyab, Santa Fe, 1980–1992. She was a founding member of Kalu Rinpoche’s International Translation Group in 1987 and has taught the Tibetan language to hundreds of students over the years, including creating a popular Tibetan language correspondence course. She retired from Naropa University in 2018 after twenty-six years of service. She continues her written translation work from her home in Boulder, Colorado."[1]

She has been a Tsadra Foundation fellow since 2000.